[actual review probably still needs some working on, but it feels like I should post this and then maybe carry on working on it, or post a second review hereafter]

In Lancaster, the piece was performed as part of a three-day conference on Jelinek, including several lectures for which I wish I could have stayed, and a round-table discussion: Plays in Translation on the British Stage, in which I took part, alongside the director, producer, dramaturg and translator of the piece, plus Giles Croft of the Nottingham Playhouse (late of The Gate and NT) and Peter Mikl, the Director of the Austrian Cultural Forum in London. I mention this to explain away any undue level of extrinsic expertise that I might have unconsciously absorbed and accidentally regurgitate during the course of this write-up.

Ein Sportstück (translated here as Sports Play, although A Sports Piece is equally possible) is perhaps one of Jelinek's most famous “plays”. I give it scare marks since a lot of people might blanch at calling it a “play”; theatre-text might be more comfortable. The text itself, now published by Oberon in Penny Black's startling good English translation, runs to 121 pages of dense type. And we're not talking pages of:

Next Character: Replies in four words.

-type dialogue either. This is more-or-less 120+ solid pages of type. If the whole play were to be performed, it would take about 5 hours. Here, production company Just a Must take 2hrs7mins (1hr49 in Berwick, according to Twitter) to do about 30 pages of text, with some, y'know, bits where they do stuff other than speak.

The reason that Sportstück is one of Jelinek's most celebrated plays (by which I might mean: one of the plays by Jelinek I'd actually heard a lot about) is the seminal (première) production by the enormously highly-regarded (former-East) German director, the late Einar Schleef. This ran at five hours in the “short version” (seven in full), and *still* didn't stage all the text. He did, however, have a massive budget and 142 people on the stage. Produced in 1998 at Burgtheater, Wien he also had a context where his use of a Fascistic aesthetic, borrowed/inspired in part by Leni Riefenstahl's 1938 film, Olympia, was a meaningful part of an ongoing mental landscape of national shame.

So, there's a history that might lead one to expect a work of some enormity. Actually, at only two hours (no interval. Good) and with a cast of only seven, this production is much more a bite-sized, intelligent chamber piece than some intimidating monolith of regietheater-gone-mad.

But, the basic two questions here remain: what's in it and how's it done? (And also maybe: what does it look like? And: how does it feel?).

The text itself is a kind of rambling-but-viciously-sharp and funny, stream-of-consciousness; largely, but not exclusively, on the subject of sport. Sport and war, sport and classical mythology, sport in history; sport and popular culture, sport-related pop cultural tragedies, and so on. Jelinek has even written herself in as a character – or, rather, as an obliquely named speaker – Elfi-Elektra; hell-bent on either cultural or actual parricide.

(The play, it is noted in production dramaturg Karen Jürs-Munby's splendid introduction to the text, is one of Jelinek's most personal, incorporating mourning for the death of her Jewish father a couple of decades earlier.)

On paper, the text is kind of just a jumping off point. Indeed it opens with a page of stage directions which begin:


“The author doesn't give many stage directions, she has learned her lesson by now. Do what you like...”

So, in describing what happens here, we cannot divorce the text from Vanda Butkovic's production. As such, across this two-hour stage-traffic jam we find variously: dialogues, monologues, and a lot of chorus work. We see physical theatre, stylised acting, and stuff that looks a lot more like non-acting and performed naturalism all trying to carve a place for itself within a deliberately contradictory landscape.

Quite literally. French Scenographer Simon Donger's stage design consists of 140 kilograms of white teddy bear stuffing. Opening as a mountain (Olympus? Ho ho), it is gradually, or suddenly transformed into unfamiliar fields, dry-ice-like stage covering, banks of cloud, sand dunes and even golfing bunkers. The chorus emerge from the fluff and eventually, stripped down to nothing, fade back into the fluff.

Sitting outside the chorus, and entering the stage ahead of them Denise Heinrich Lane's Elfi Elektra. The first thing she does is take a “Jelinek” wig (Elfriede has a famously recognisable barnet) off the mic stand and put it on. But it's her reading of the text that is arresting. Seductive, languorous, fluent; this is a vocal performance that raises speaking to the level of song. It's the same sort of precision that the mezzo-soprano brings to Schubert's lieder. Elsewhere, within the chorus-work, however, there's evidence of a more knockabout aesthetic, perhaps faintly reminiscent at times of Forced Entertainment; although each chorus member also seems to bring a different, personal performance style to the proceedings. I suppose I should note that some of these were more to my taste than others, but in the midst of all the excavating of meaning from text and performance, it feels almost too nit-picky a point to make something of.

The sensation of watching the thing is in fact fairly strange, since the production has managed to pull off that mainland European, postdramatic, post-Brechtian aesthetic so well, despite many of the actors being British. As such, it feels strange to be watching a performance in English that so successfully does not try to seduce you as an audience member, or flatter you, or slavishly try to keep your attention, or trick you into becoming “emotionally involved” with the “characters”. That's not to say that it *isn't* funny and engaging, but somehow you focus more on the intellectual content than trying to “empathise” with specific characters or their *emotions*. All of which still feels strangely alien to describe as a success in British theatrical terms.

And yet, it is. This is an acutely intelligent rendering of an important bit of literature. Which makes the shortness of this tour seem all the more perplexing, well, culturally downright embarrassing.

Anyway, it opens in London shortly after the Olympics start – something we're apparently not allowed to say – and is a damn sight more intelligent. Vote with your feet, people. 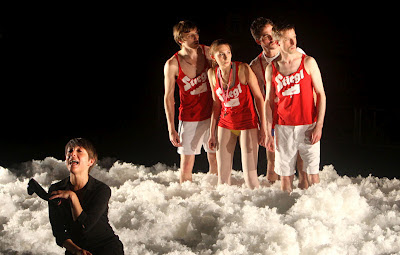 Fascinating review and some great photos from the performance. You've given me some interesting things to think about and caused me to read a bit about Jelinek and her work, and some related topics. So thanks for all that.