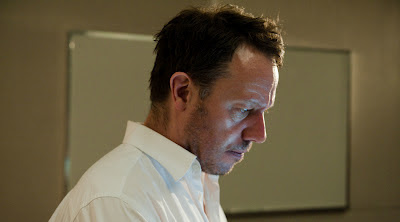 As I write, highly civilized human beings are flying overhead unintentionally killing me. They do not feel any enmity against me as an individual, nor I against them. Most of them, I have no doubt, are kind-hearted, law-abiding people who would never dream of committing murder in private life.

And yet, this is where we seem to be as a species...

[the below written directly after seeing the show a week ago...]

The subject of Ten Billion is the earth's growing population. It is primarily a list of facts. I wrote a lot of them down. If I repeat the facts, then you quite possibly won't bother going to see the show. And I think you need to see this show. I think everyone should see this show. Not because it'll do any good, or because it might change something, but because it's sobering to be told where we already are. And because I've never seen this information presented this starkly by anyone ever.

If one of the things that makes art great is the way that it perceives connections between things, then this outstrips every artwork I've ever seen simply by constantly demonstrating connections behind everything. To the extent of giving you synaptic vertigo. It makes explicit what is hidden far more effectively than the most impassioned political agit-prop or intricate avant-garde gesture.

[All the above written by hand on the Tube. I next wrote: “I'm kind of hoping that the whole show is an elaborate hoax, merely an imaginative response to the problems about which it talks”]


There's a lot more to say about Ten Billion than the above. There's also the question of how to review it. Is it most useful to précis the information and arguments made? To convey a sense of the theatrical experience? Or to attempt to analyse what and why and how it finds itself in a theatre and how it does and doesn't function as theatre?

The piece's relationship to “theatre” is fascinating. What do we mean when we talk about theatre? It might be justifiable to describe it as (generally): somewhere where we go to see something made-up that strikes us as “truthful”.

In this respect, Ten Billion feels very different. The man standing in front of us is apparently the actual man who has arrived at the actual conclusions that he's actually telling us about. Already we are being presented with a lot more reality than we're generally accustomed to. It's a level of “reality” left pretty much untouched in theatre except by Rimini Protokoll and, oddly, David Hare. As such, the usual “problem” of Verbatim Theatre seems slightly side-stepped; the problem usually envisaged as “the unseen editorial hand”. Here, since the subject is, well, the subject's subject. In theory we should be able to trust him to have made intelligent, representative choices as to what material to include in this 65-minute lecture.

But, here already, we can discern a couple of interesting theatrical problems.

In theory the guy has all the time he wants. He could certainly have taken another hour. Why hasn't he? Is this all the information there is, or has he just shown us the best bits. If he's only showing us the best bits, is it to make his message the most effective it can be? Because he or director Katie Mitchell don't trust us to last much longer with this barrage of facts and extrapolation? Or because if he told us more, some facts that don't fit as well with his thesis might surface?

In a funny way this show is about trust as much as anything. It is, after all, just a sole guy telling us some stuff he believes. Right?

We're taking a lot on trust anyway; that he is who we're told he is (why do we believe this? We never normally do); that his research is sound (even harder to verify: what do I know about science?); and that his conclusions are therefore correct.

(Oddly, perhaps the piece's biggest nod to “theatre” is also its biggest trust-trick; Emmott delivers his lecture from what he tells us is a “spookily” perfect reproduction of a corner of his office in Cambridge University. At one level, it's the sort of set we're so used to seeing in a theatre that we barely think about it. On another level, is seems to ground this man in the reality of both his profession and his credentials. But, when you think about it at all, it's an odd choice to have made. Sure, a lot of it could be traced back to Katie Mitchell's extreme-naturalism-tic, but I'm not convinced that quite covers it.)

In a funny way, I was forcibly reminded of medieval Christianity. Of how one had to put your faith in the man at the front telling you things. Telling you things as if they were sure and certain incontrovertible truths. And, moreover, telling you truths that were pretty upsetting. Tales of future hellfire and damnation and so on. And that's what Ten Billion is telling us.

(I'd like to point out at this stage that I'm not especially climate-change-sceptical. It strikes me, that if a vast majority of scientists all agree on something – gravity, the atom, DNA, etc. – then they're probably right. I'm given to understand that Emmott is on the extremely pessimistic end of the thinking on the subject of over-population and global warming, but I found what he said and the logic with which he pursued it incredibly persuasive.)

Ten Billion is a picture of a human race with maybe only a generation and a half until war, famine, plague and pestilence all but eradicate the human race. We've heard a lot of that before. What I've never heard before is anyone saying: “It's ostensibly too late to do anything about it now.”

Emmott is even perhaps most interesting when he's debunking some popularly held ideas about climate change. He's not worried about “oil running out”, for instance. He reckons there's still plenty more to be found. But more interestingly, he doesn't think that individual contributions (usually of the hair-shirt variety) can now make any difference.

He explains a lot of the processes by which items that we consume use resources, but doesn't suggest we should stop consuming them. By the time a car has been manufactured, it has already done so much damage to the environment, he suggests, that it hardly matters whether or not we drive it. And if you don't, someone else will anyway.

His one possible solution sounds something like a single global crisis-government be formed, and that it be unelected, and that its power be supreme. He reasons that the changes which every government would need to make in order to prevent a global catastrophe are such that no one is ever going to vote for them. It's not often you see a piece of theatre which argues that only extreme environmental totalitarianism can save us.


That said, I'm not sure everything that he said was watertight. It felt like sometimes there is a bit of slippage. For example, at one stage he points out that there is now the potential for the largest lethal global pandemic in human history. He talks about the Spanish 'flu that swept Europe after WWI, which killed between 50 and 130 million people – between 3% and 8% of the world's then 1.86bn population. This one, he said, would be worse. Would be spread further and faster. And, he said, it was not a matter of “if” but “when”. I wanted to put my hand up. Surely that sort of massive cull of the world's population, while tragic, would surely alleviate the incredible strain on resources that form the main subject of Ten Billion.

What really grabs you about the piece is the bleakness, however. The passionate bleakness of this probable future. The resigned insistence that there really isn't anything we can do on a personal level. In an odd way, it is kind of liberating. It goes way beyond: “It doesn't really matter if you take a plane rather than Eurostar”, to a place that implies: “Well, there's not much point in worrying about posterity”. It's a kind of guilt-free nihilism, with the mantra: “It doesn't matter what we do now, we're all fucked anyway”. I have to confess that I found it incredibly powerful and seductive.

The last line of the piece [SPOILER ALERT] is perhaps the most chilling and resonant, though. Emmott describes asking a colleague – one who he makes a point of describing as rational and intelligent – if he could only teach his son one thing, what would it be?

“How to use a gun,” his colleague replies.

What a thoughtfull and interesting review. Not sure about the comparison with christianity though.
They were preeching hell and damnation in order to get us to do their bidding. Wheras, this is just telling us the truth about where we are. What we do with that is pretty much up to us.