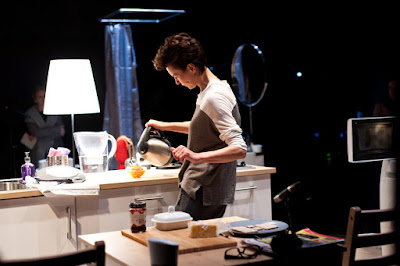 Franz Xaver Kroetz’s Wunschkonzert (or Request Programme/Show, or Glasba po željah) is a remarkable play. Written in 1971 [Kroetz would have been 25], and first staged in Stuttgart in 1973, it simply and meticulously details the last hour in the life of a middle-aged woman who commits suicide.

In the script, there are no spoken words – although it is implicit that there will be spoken words in the form of the found text of the titular radio programme to which the suicide, Miss Rasch, listens. In the text, Kroetz suggests the Bavarian evening show Your Request? Hosted by Fred Rauch at 7.15pm every Wednesday; “Beyond Bavaria, a similar radio programme must be found.” he helpfully instructs his directors-to-be. From 1971. This is a helpful frame for the new tensions that now operate between text and production.

Kroetz’s youthful, German, Marxist text now reads quite “coldly” in English – its portrait of the woman who is to take her own life is detached and patrician. To an English reader, it could read more like snobbery than compassion. Rasch is at all times treated more as a symptom, than as a person. Of course, none of that need bleed into the staging. Details are details, and how Kroetz feels about them is neither here nor there when the room has been assembled according to his instructions. So what if the way he chooses to characterise the way Rasch washes herself is “pedantic” (in the English translation at least – perhaps it’s only in English that it reads as snobbery. Perhaps in German it’s just refreshingly direct, but we don’t possess the non-judgemental vocabulary to express it as such in English), if the actress doesn’t play the pedantry, then who’s to know? [This production doesn’t feel like it looks down on its protagonist, for example.]

The next problem of the text/production is how much both popular culture and working conditions have changed since 1971/73. Beyond this, there is also some potential for dispute between the lower-class circumstances of Ms. Rasch’s life and her suicide. We do not know why she commits suicide. Kroetz lightly implies that it is down to ennui, boredom and irritation. And perhaps some people do commit suicide for these reasons. I really don’t know. Wikipedia suggests loneliness.

TR Warszawa and Teatr Łaźnia Nowa Krakow’s production add a whole raft of extra problems to the pre-existing questions that the text raises; the main one being: should the play remain a historical drama about a woman’s suicide in 1971 or should it be updated? If it is updated, what can be allowed to remain?

[There is also here the extra problem of four countries and 45 years now being involved in this simple exchange of information; from Germany (ageing text), to Poland (production), to Slovenia (host theatre and majority audience) to UK (me also watching it and now writing this)]

Over my viewing of the production and writing of this review hovers the ghost of Katie Mitchell’s 2007 Schauspiel Köln production. Which I did not see. But which, having seen photos, being familiar with Mitchell’s work, and having read the play, I think I can almost completely imagine. (It really is excellent.) So there’s a sense of a technically impossible memory haunting this production like a kind of ghost. There are also the ghosts of the various people one has known who have committed suicide.

Beyond this, there are the ever-persistent, never-fully-answered questions about what theatre is for. Is is veracity? Analysis? Authenticity? Symbolism? Metaphor? Research? Catharsis?

Director Yana Ross’s production of Wunschkonzert is, I suppose, set in Poland. It feels as if the production team have actually created the titular radio request programme themselves. As such, the text spoken feels like I might be more loaded than one would otherwise expect. Similarly, the choice of songs seems like it’s been deliberately pulled together to underline some sort of thesis(?) (Daniel by Elton John, I’m Your Man by Leonard Cohen, and of course, uh, To Mi Je Všeč by Nina Pušlar...).

More interesting, though, is the effect of globalisation and the internet/comupter games on the piece. In the original Ms Rasch finishes a little woven blanket/rug she’s been making. Yes, sure, the effect of this (even just reading it) is unbearably poignant and more than a little sentimental. Here the blanket/rug has gone. After all, who makes rugs/blankets in 2016? Instead, this section is replaced by Rasch playing Sims on her laptop. The effect of the change, though (even when you don’t know it’s a change – I read the text after seeing the show) is essentially one of reactionary irritation. I mean, the first thing is at the very least a satisfying act of creation. Rasch even looks at the blanket, satisfied. Forgive me, computer games fans, but Sims *really isn’t the same thing*. At the same time, she doesn’t check Facebook, Twitter, Instagram, 100 other social media sites. Is this symbolic? Does she have so little life online? It seems marginally unlikely, if she’s got this Sims habit. I mean, GOD KNOWS, I’m all for directorial interventions, but this one feels too loaded.

And then there’s the TV programme. It’s a good half hour of Kim Kardashian’s Wedding. I’m really fighting the urge to say that if someone made me watch half an hour of KK’s Wedding, I’d probably be lining up the sleeping pills too. But, yes. Again, without the comfy, sleepy, West Germany-ness of 1971; the somewhat more regimented and low-key offerings on telly and radio, the pitch and point of the thing changes. Perhaps not as much as I’m imagining, and perhaps in its time – in 1971 – whatever was on the telly and the radio then felt just as alienating and futile. But my bet is that is didn’t to quite the same degree. There are, after all, HUNDREDS of channels of EVERYTHING now. And in a way, that can be a problem too. But it’s a different problem. (Similarly, does she kill herself because, well, we’re al a bit sick of IKEA now, right? The entire flat is decked out in the stuff, and Rasch even reads the catalogue for a bit. I mean, *I know*, consumer capitalism sucks, but even so...)

I don’t think I’m saying that the piece *has too* always be a museum piece, but as soon as you bring the modern world in, then the architecture of the piece seems to crumble. When no one can even think of a (lower class) radio request programme to use, can you still meaningfully put on a play called Request Programme? But then, how much do we believe the analysis relating the suicide to class, and then on to loneliness? Who knows? I don’t know how much actual research Kroetz did, or even whether it’s a research play or a thesis play or a symbolic play. It’s interesting as a theatrical problem, though. I definitely don’t have any answers.

Danuta Stenka as Ms Rasch is essentially very good, if perhaps a little bit too reactive. But, again, I don’t know how much that’s deliberate, and how much is also my taste. The production is staged on a little piece of floor standing like an island in the middle of a much larger stage, and we the audience are asked to stand round it. There are (obviously) no walls. So it’s exponentially more difficult for Stenka to pull-off not-eye-meeting naturalism. (Not so much fourth-wall naturalism as 1st, 2nd, 3rd *and* 4th wall naturalism.) But, yeah, like I said, the big problem for me was decisions and reactions being telegraphed just a bit too hard.

What’s brilliant about the play, though, is the apparent unknowingness of the decision process. We really don’t know when Rasch decides to kill herself. It seems to be (to me), at the end, pretty much as she does it. A sudden impulse. But perhaps not. (This productions LOUDLY TICKING CLOCK is not a helpful addition.) Maybe I’m wrong, but people don’t kill themselves because they can’t get to sleep. Or maybe they do. That really is a discomforting thought. And, perhaps this review fails because I’m trying to make a very discomforting piece of work feel like it’s about something more understandable, where the piece itself succeeds (if/where it succeeds) because it does allow suicide to be inexplicable – at least in the moment. I don’t know. I would love to see more productions. Even full-on naturalistic ones. It feels more like a challenge to an actress than Hedda or Hamlet or Blanche or Lear...