Staging a Play: The Glass Menagerie turns out to be one of the things that I’ve wanted to see for *ages*. Namely, a performance of a play on which all the text has been muted/interpreted as contemporary dance.

Set on the deep wide stage of the SNG (with the audience also sat on it, in a low deep rake – my God it’s a big stage), the piece has a white off-White floor, a light grey back wall, and in the centre, more brightly lit, a white outline of s room, with the walls rising to about a foot high all the way around, except where there would be doors. The performers are dressed in rehearsal blacks, with their hair tied back as if ready for wigs.

And it’s completely fascinating to watch. On one hand, there’s the radicalism, and possibly even the violence of the gesture *against* Williams’s script. But then there’s also the result, which is evidently gentle, earnest, nuanced and sincere. (And the script/text clearly remains undamaged at the end, as you can see from these copies on Amazon.)

At the same time, it’s not so fascinating to watch, that I haven’t taken out my phone to write these notes [it’s fine, Theatre Police, it’s pretty light in the audience anyway, there’s no one behind me, and the nearest person on my row is about 20 seats away. And looks like they might be asleep.]

The most interesting thing is the way that the piece both creates meaning and relies on pre-existing knowledge. For example, before coming to the theatre, I’d simply picked up my ticket from desk in my hotel room and hurried over to the theatre. I hadn't remembered what the full title of the show was. Just “Staging a Play...” Once the piece had started, after about ten minutes, I furtively and frantically Googled the title to see WHAT PLAY. And suddenly I was in a different critical universe. Because, I’ve seen The Glass Menagerie. I Have Opinions About Tennessee Williams.

Suddenly, also, the set made complete sense to me. At the same time, it gave me a whole unwelcome extra set of tools with which to assess the performance...

[At this point in making notes, there was AN INTERVAL - which was very funny. The entire show is only 1hr30, so we didn’t get to leave, instead we sat and watched a performance of an interval. This consisted of the dancers/performers flopping about a bit round the “offstage” table, and printing out new pages of text. Which is genius. I can’t believe In 20 years of theatregoing I’ve never seen someone print off their script on stage before (although, remembering the printers of my youth, perhaps I do see why this is only just happening now)]

...because, without the knowledge, the contemporary dance – curiously – didn’t make all that much sense as contemporary dance. But with the knowledge of what the script is, one could immediately bring too much interpretation to bear. It’s fascinating though, that they are dancing what at times even feels like the full script. (inc. interval!)

There are voiceovers between the scenes, which offer cute-accented deadpan takes on “being a performer” and/or “making performances”.

The music is very nice.

The lighting is very nice.

The performances are very good.

The atmosphere is very relaxed.

After everything else I’d seen so far this week, nothing could have been more welcome. And, in a way, this is a perfect Festival Show. Fascinating, open, sorbet-like. In theory, the dances here could have been anything, and certainly could have demanded infinitely more attention; but there was something wonderful about the laissez-faire gentle quality. I think you’d have a harder time selling this as a piece of work to all but the most hardcore dance fans if this was shown in the usual one-show-in-the-evening-after-a-hard-day-at-work way. So, is it elitist? No; it’s just the rest of the way we’ve allowed society to be structured that sucks. [But, yeah, the people who work hardest for least money might think you’re taking the piss a bit if you stuck this on at (say) the Liverpool Everyman instead of Ellen McDougall’s version. Even if only a dedicated philistine could deny that it was an interesting experiment.]

After the “interval” – about an hour into the performance – the performers return to the “set” (after performing an intricate outside-of-*set* group choreography) and do the scene where Tom’s mate comes round(?). Now they’re dancing around with the scripts in their hands. And it’s funny because *even the dancing* feels like they’re being *a bit literal*.

But then, with a dazzling change of pace, the scene between Jim & Laura comes out of a blackout and is genuinely lovely. Totally legible, almost fully acted, and just incredibly touching. Attention completely grabbed.

I think this set a new standard and blueprint for what “experimental theatre” can look and feel like (for me).


“I don’t remember if we locked the door. Do you?” 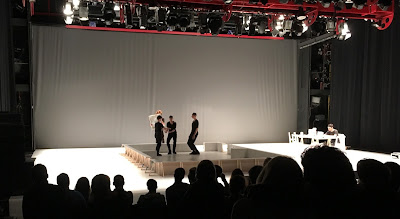