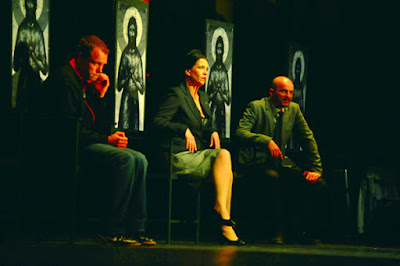 Jovan Sterija Popović’s The Patriots is brilliant. Nominally, it deals with a very specific episode in Serbian national(ist) history in 1848-50 (it was written three years later in 1853, but not performed until 1903). Actually, it presents an excoriating comedy of hypocrisy and doublespeak that would resonate as strongly in Brexit-UK, 2016, as it does through Serbia’s own history.

What’s especially appealing about this performance – the Serbian National Theatre of Belgrade playing the stage of the Hungarian National Theatre in Budapest – is that the subject of the play is a war between these two countries. (It’s also worth knowing that Jovan Sterija Popović (1806-1856) is pretty much Serbia’s Molière in terms of both importance and scabrous satirical approach.)

In 1848 a wave of revolutions swept across Europe (and elsewhere). The list of countries not involved (including of course Britain) is much shorter than the list of those that were. Hungary rebelled against the Habsburg Austro-Hungarian Empire and during that struggle to secede the relatively small Voivodeship of Serbia and Banat of Temeschwar attempted to gain their own Serbian independence from Hungary.

On paper, with this sort of historical distance (if not currently geographical distance for me), it might seem like a bit of a trifle, but Popović’s script in András Urbán’s modern dress production manage – with great economy – to make the conflict seem as brutal and bloody and horrible (and “relevant”) as anything since. There is a moment late on in the play where the Serbian nationalists are singing a violent, rousing song about how their leaders are right, and how the Hungarian oppressors must die, where they point their AK-47s at the (almost entirely Hungarian) audience and name-check Slobodan Milošević, which must rank as perhaps The Most Confrontational Thing I Have Ever Seen In A Theatre. I mean, sure, we trust that the guns can only fire blanks, and they don’t really mean it about Milošević, but, fucking hell...

And *of course* recent history has left a pretty sizeable elephant in the room. How many days is it now since the Hague sentenced the Bosnian Serb leader Radovan Karadžić? It is impossible to have lived through the nineties without a pretty strong impression of nationalism in ex-Yugoslavia. The effect of the play, in the light of that recent history, is all the more bitter and dizzying. I can’t think of another play that so accurately predicts a cycle of history repeating itself. The vocabulary of nationalism feels completely contemporary, and the futile violence and vainglorious warmongering has precisely the same effects. And not just to Serbia. Again and again I was struck by how much of the play could apply to Britain.

The real coup of the production, however, is that it actually makes you understand the nationalistic urge. It isn’t finger-wagging or preachy. It doesn’t just show a straw target for the audience to dismiss out-of-hand, it offers rousing music, and a terrifying glimpse of how, actually, blaming a bunch of other people for your problems, painting yourself as “the oppressed”, and maybe overthrowing your oppressors with a revolution, might be a lot of fun. And how an armed revolution might be the most fun of all. Imagine the Occupy movement with charismatic leadership and Kalashnikovs for everyone...

Of course, ultimately the play/production is a chilling, bitter satire on the tragedy of nationalist thinking, but for something that seems so obvious, the real achievement here is that this revelation still manages to feel like a rug-pulled out from under you.

I should say, there’s also something incredibly refreshing about how well the play works on stage. It doesn’t have almost everything we’re taught that plays should have, and a load of the things it does instead feel like they’d get Popović barred from most “Playwriting” courses, but it completely works. Perhaps this is in part down to the focus, energy and commitment of the actors (of course it is), but it’s genuinely revelatory to have historical facts/events interspersed with popular song, and for that to feel like more than enough narrative drive, without ever even really getting a grip with who any of the characters are...

So, yes. If I were Rufus Norris, I’d get *this production* on at the NT of GB, PDQ. (No. Please, please, please don’t get *a writer* in to change all the specifics and make it “about Britain”.) 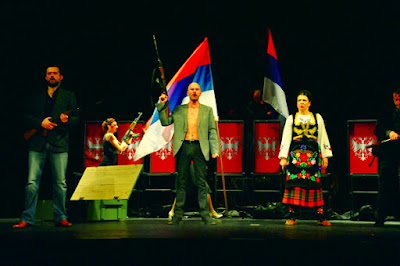