In the same vein, I really don’t want this to be another review of Cleansed...

So, yes. In the last week, we’ve spent a lot of time thinking back over the work of Sarah Kane. Tonight I’m seeing (the Citz/HOME production of) Endgame. In my spare time, I’ve been watching a lot of Scott and Bailey and Happy Valley.

Oddly, in one sense, Negative Space sits perfectly at the intersection of these three writers’ works.

The piece opens with a small white room, a chair, a stepladder, and two performers. The “room” – three walls, no ceiling – is just plonked in the middle of the much bigger Contact stage. It looks both like a compromise of touring a specific sized set to various venues, but also like it might have been deliberately designed to be a modest sized “set” that will always be marooned on precisely much bigger stages like this.

The first thing that happens, I think, is that the male performer takes the step ladder, puts it against the right wall of the room (as we look at it), climbs up, and pops over the top of the wall. He pulls up the step ladder after himself and both he and step ladder disappear into the wide walls that flank the room. The female performer is left on her own.

A trapdoor opens. A man with a little white Jeremy Corbyn beard pops up out of it.

There is some wordless exchange and, I think, the female performer disappears down the hole as he clambers out of it.

I could go on describing the actions, but a) I’d probably get a lot of it wrong (although what I got wrong and how might be interesting), b) I’m not sure there’s much point. It’d be like reporting a dramatic play with “And then he says, and then she says...” What you need to know is that there are six performers – two women, four men (probably all playing their own genders, all dressed in starkly gender-normative clothes; suits for the men, dresses and heels for the women) – and they come and go. They interact, wordlessly; and we can imagine some negotiated relationships between them. We don’t really know who they are, where they are, what they’re meant to be, whether they’re meant to know each other already (mostly not, I’d say), what this room is in relation to any world outside it.

And I couldn’t stop thinking about how much it reminded me of Cleansed. But also of Blasted. And also of Endgame.

Lest you think I’m unduly fixated, the suits are grey, the shirts are white, the haitcuts aren’t a million miles off, and small sunflowers are one of only about three recurring motifs throughout Negative Space. It’s not *just* fixation. There is also visual coincidence. But then there’s that bit in Blasted where the blinded Ian stands in a hole in the floor too.

And, more pertinently, the main thing that happens in Negative Space is that the set gets destroyed. Also á la Blasted, if you like.

Here it gets destroyed, slowly, with claw hammers. Smashed through, slowly, quickly, sometimes just smashed through by a performer’s body. Perhaps weakened first by a series of hammer blows. Sometimes, maybe not even that. 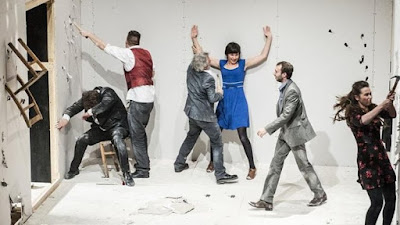 The piece is 55 minutes long.

There’s no soundtrack (although I did spend time imagining what the effect of various ones might be), no words (although I imagined some of those too), and there’s no stage blood (ditto).

The effect for normal people watching – by which I mean everyone in the audience who wasn’t me, and wasn’t therefore thinking about Sarah Kane or Beckett – is that it’s very funny. I was more fascinated by how violent it was. Or rather, the extent to which it suggested violence. I’m not imposing that, btw. It’s six people with hammers smashing up a room, sometimes throwing each other through walls, or dragging each other into trapdoors (that series of Scott and Bailey (3) about the bodies buried, Fritzl or West-like, in the cellar, resonated there...). But, yes, it’s not a stretch to see the violence, even if it is funny, like it is in Tom and Jerry or maybe a Harold Lloyd film. [Indeed, in terms of what I *should* be comparing this to, I think maybe something like Station House Opera’s “postdramatic Buster Keaton” show Mind Out is a more proper response (if that means anything to anyone).]

Ultimately, I suppose what I’ve done here is indicative of just how much blank space there is in this small white room to interpret, or think freely about what’s going on in front of you. Yes, there are hammers, walls being broken, and some moments of clowning or slapstick, but there is very little sense of being directed to do anything specific with those things.

One could (easily) pick at the gender politics. (Or note that nor are the company a miracle of inclusion, so far as is visible.) But, really, Negative Space will largely, I suspect, play back to you your own understandibngs of the world so far, while being continually engaging and “entertaining” throughout. I’d quite love to know what compacts with narrative or signification other viewers made.

After watching, I got home and Simon Stephens had sent me an advance copy of A Working Diary, of which I foolishly read half in one sitting. As such, writing the end of this review, I’m now preoccupied with Stephens’s reiterated insistence on “story”. It’s a fascinating (if unhelpful) counterpoint to Negative Space – the point of which, on so many levels – felt like an active dismissal of “a story” and possibly even narrative. What does fascinate me, however, is the extent to which the human mind (or perhaps the English mind?) maybe tries to fill in stories onto this blank. Should we? Should we not? Could we tell this piece *as a story*?

As it happens, I don’t think I did experience it as a story, even as much as there were possible narrative threads there to pick up and tie together. It felt to me more like a series of moments, and abstractions, and references. You could choose to make a story out of those, but it’s not the only way to experience them, and perhaps insisting on a story would blunt edges and streamline where jaggedness would be a more honest reflection here. 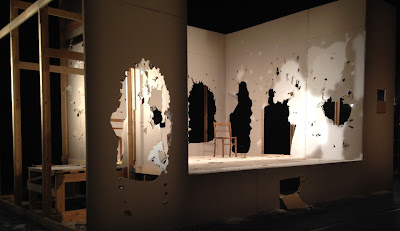 Hello,
It took me a while to be able to read, I was still stuck in the intensity of doing the shows, but thank you.

And Station House Opera means a lot to me,

I worked with the company for a few years.