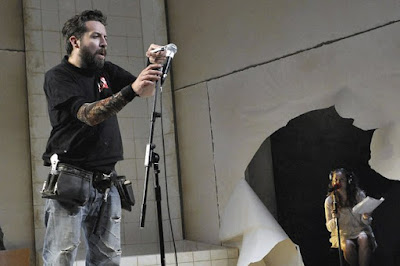 If you want a “proper” review of Filter’s MSND I’m sure you’ll be able to find one. To review this “properly” you’d basically have to reflect the gales of laughter, the continuous hilarity, the shedload of wonderful performances (namecheck a few: Hammed Animashaun’s astonishing dancing and brilliant vocal stylings, Jonathan Broadbent’s perfectly-pitched self-punctured dignity and physical comedy, and possibly my favourite moment of the whole thing, Victoria Moseley’s into-a-mic-through-vocal-effects turn as a sarky Scouse sprite). Probably say “inventive” or “postmodern” or “meta-theatrical”. Note the plot. Characterise it as something (either: “dark” and “menacing”, etc. or: “joyous” and “riotous” etc.) Note directors: Sean Holmes and Stef O’Driscoll. Note designer: Hyemi Shinn. [No dramaturg.] Say the evening belongs to Ed Gaughan’s Peter Quince. Say he acts as a kind of super-live, stand-up, compere. Note that he’s Irish (what?)... Got any wordcount left? No? Cool. That’s pretty much the show. Funny. Shakespeare. Doesn’t feel like hard work. Shakespeare. Funny. Live music. Comedy. Extemporised humour. Liveness. Funny. Shakespeare. Comedy. Fun. [174 words. Bingo.]

So, no, let’s instead try: The Work of Art post-The Age of the mechanicals Reproduction?

What’s fascinating about (this iteration of) Filter’s A Midsummer Night’s Dream is that it’s kind of the most effortlessly “European” Shakespeare production I’ve ever seen in Britain. I’ll concede that in the first instance this is based on what it looks like, and a fairly generalised idea of “Europe”. But I think it goes deeper as an analysis. In terms of translation, dramaturgical intervention, and the way that the actors play with the text, and break the play... It’s all that stuff everyone was going on about after Three Kingdoms right there, isn’t it? But this is a revival of pretty much the show that played before 3K... And we’d had Filter’s Twelfth Night, so Christ knows what we were feeling so hangdog about back in 2012. We can so plainly do this.

I think the reasons it never occurred to me to frame it like this with Twelfth Night are largely shallow. For a start, Twelfth Night – which I saw at the Tricycle Theatre late in 2008/9(?) – didn’t really have a set. (That I remember. Did it?) Of course, there’s the fact of it being completely joyous and laugh-until-you-cry funny too. That does distract from “recognising inventive dramaturgy” too, but I think the aesthetics had a lot to do with it too.

Here we’re in a scrappy, dirty white-walled room, tiled up one corner with a grotty bath and shower taps. It looks now – forgive me – like an hommage to Three Kingdoms, and to Blasted, and to Peter Brook’s MSND, and to the kind of indicative, nowhere, hinterland rooms that aren’t anywhere, which you put plays in to have them put somewhere. Somewhere with walls. That this room, like the one in Negative Space, ends up smashed up – blasted – cannot fully be coincidence, can it?

And then there’s the costuming and the music. As you might have noticed, if you’ve been reading Postcards... since the beginning of the year, I’ve been very influenced by Mark Fisher’s thinking in his book Ghosts of My Life, which in places seems to argue something like the inescapability of the Seventies. And it feels like there’s something very like that here. Something about the humour, and the costumes, and the styles of music used, and the Radiophonic Workshop effects... even the choices of voices and accents feel slightly like they owe a lot to the Seventies(/early Eighties). Of course, this makes perfect sense. It’s basically when the vast majority of the people on stage (and director) were children. That decade’s TV will be the most levelling, common language available. So, it seems right that Johnny Broadbent’s posh, ineffectual Oberon sounds like he’s from Bank Holiday repeated Carry On films and looks like an escapee from Tiswas. Similarly, it’s right that Hammed’s Demetrius is wearing a black polo-neck top and suit jacket. Or that the excellent John Lightbody’s Lysander-in-love also recalls Stephen Toast, who is the very essence of this inescapable Seventies/Eighties interzone.

Perhaps the intervention that brings it home most of all is Ed Gaughan’s Irish comedian, Peter Quince (perhaps at the same time conjuring the ghost of Griffiths’ Comedians). Not just in terms of accent and/or costume – although very much those too – it’s more in the routine with which he kicks off the show. Yes, on many, many other levels, this is just brilliant thinking when it comes to Shakespeare: what better way to make it feel relevant and contemporary than to pick an analogous event and heavily imply the link verbally. It certainly saves A Lot of time with silly costuming and signposting. And means we can then just ignore it, but let it resonate throughout. This is, I think, the genius stroke here. And, indeed, it recalls that other most urgent MSND, Dmitry Krymov’s, mechanicals perform for Russian new money A Midsummer Night’s Dream (As You Like It). This somehow hints at the same overall catastrophe, talking about all of us in the theatre in the midst of this never-ending “Austerity”, but at the same time, evokes a similar catastrophe through the medium of Seventies Children’s TV, pop music and food fights. It *does* the play. And does it without overt comment on the disastrous gender politics, or horrible drug-rape logic of Oberon’s “trickery”, and yet it’s all there. Not dwelt on, but not prettified or excused. In a lot of ways it’s not remotely kind to Shakespeare or his play, but nor should it be. And the agency it finds to exact this revenge also seems to come from within the play itself. Which is fascinating and complex. The well-meaningness and forelock-tuggingness of the mechanicals is removed. Not quite replaced with the coming insurrection, yet. But gone, all the same. And replaced with agency and music. There is the comic ineptitude of their graceless theatre, but also the aptitude of their musicianship. And the violence (or at least the genuine bite) of the stand-up.

So, yes, wittingly or otherwise, on purpose or not, watching this Midsummer Night’s Dream we’re given about as acute and chilling portrait of contemporary Britain as we’re likely to see on stage – a Britain in the grip of a neverending financial crisis, a Britain where power is invisibly exercised in places we never get to see inside, and where decisions are taken right out of our hands. Where our only real recourse is to lose ourselves in childish bunfights, nostalgia, or pointless, arbitrary romantic entanglements, and if it all gets too much, pretend it’s all a dream.

this review brought to you by Magazine’s 1978 debut album Real Life. If we’re all inevitably going to drown in nostalgia, we might as well drown in the good stuff: