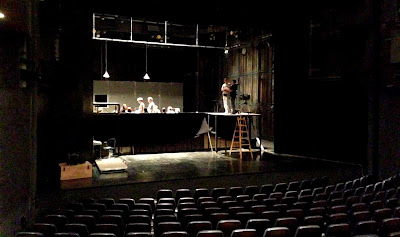 The second performance of BITEF49 (the first I saw; Herbert Fritsch’s Murmel Murmel played before I arrived), was also an adaptation of a book. And, while I want to say that the means and effects used in The Death of Ivan Ilych and The Iliad were polar opposites, it wouldn’t even be true.

Tomi Janežič’s production also take place on a bare stage, but one which feels ferociously Spartan rather than merely “undressed”. This feeling of deliberate discomfort is supplemented by the fact that the audience is also seated on uncomfortable wooden chairs on the stage, in a long shallow rake that runs the full length of the stage and into the scene dock. At the rear of the stage is a high blank black wall, leaving only a thin corridor of a playing area. Proceedings feel deliberately cramped yet spacious. The flies (like the bits for flying in and out scenery) almost mockingly high above us.

The cast file on, into this narrow corridor, and one begins to read from Tolstoy’s The Death of Ivan Ilych. Into a microphone. At the beginning the cast are dressed in a kind of “neutral” modern-dress, sombre black, or funeral suits. One man sits on a wooden chair downstage and pretty much in the middle. He never takes the microphone or reads. Or moves, really. My impression is that “he is Ivan Ilych”. Sort of.

After a bit of the text being read to us, we in the audience are invited to read to the end of the chapter to each other. There are English and Serbian versions of the text available. I think this process gets us up to nearly an hour into the four hour piece.

Throughout this first section there is a man painting the black back wall white with a roller. It’s pretty slow. Everything is pretty slow. He’s not doing an especially good job with the roller, but at least it’s something to watch. Maybe some more of the story gets read by the performers. Then there’s the first interval. Maybe an hour twenty in? It’s been pretty purgatorial so far. There are good reasons for this. Not least, that I’m reading surtitles or off paper. So this is basically reading. But quite slowly. In an uncomfortable chair. There are, I think, a lot of subtleties and interesting things about the staging, and I think the slowness too is a strategy.

Maybe even before the end of the first part the cast (except sitting Ilych cipher) have changed into quite hardcore Mad Men style mid-sixties costumes (costume design: Marina Sremac). The book is from 1864. I’m pretty sure this isn’t why, though. Actually, no reason is ever particularly revealed, but it still seems somehow like a right decision.

The Death of Ivan Ilych is a pretty laconic, matter-of-fact book. With occasional waspish asides. Essentially it gives all the main points of interest in the life of this singularly uninspiring man who at no point displays any great passions. He essentially conforms entirely to class-expectations, and if he’s interested in anything it’s at vague petty rivalries and trying to keep his wife from making a scene. Several properly awful things happen to him and his wife – two of their children die, for heaven’s sake – and yet the omniscient narrator maintains an ironic distance which seems to echo Ilych’s own. It’s a bit like the narrator is fooled by Ilych’s own stoic facade. Or, worse, that the death of children wasn’t expected to make that much impression on a marriage back then. But one suspects it always kinda stung, no? Even if infant mortality rates were higher.

So, we’ve got a dispassionate story being told in a way that even enervates the remaining interest that the story. Which I, as an Englisher, had to read. Talking to other people who had seen this and other examples of Janežič’s work – well, apparently he’d made an *astonishing* Seagull a couple of years ago, and this was harder work for everyone. But, even so, I think I was much more at a disadvantage for not understanding Serbian.

Even with all these factors ranged against it, though, and even with it actually being a *really* hard watch, and a big ask, I feel very pleased to have seen it. It was uncomfortable, slow, excruciating and uncompromising, but I think it really had a certain quality that kept me intrigued and kind of riveted, even while not. Does that even make sense?

The thing with the painting of the wall felt particularly crucial. I wonder if it’s just my political leanings which made me see it as a beautiful way of illustrating the problem of pre-Revolutionary Russia. This tale of comfortable bourgeois misery taking place while outside the workers... And, let’s be honest, the one worker was the only person getting anything done, while poor old Ivan Ilych just sat on his chair and waited to die...

It might have taken four hours – which is a hell of a way to make a point – but, Christ, maybe this is precisely the sort of afflicting the comfortable we need more of.