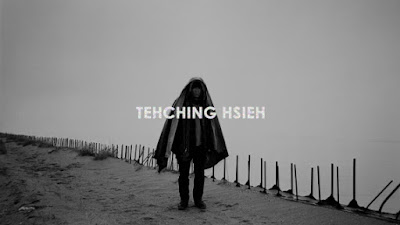 Until the 26th of October the Live Art Development Agency have got the 30 minute documentary film of New York-based Taiwanese performance artist Tehching Hsieh’s One Year Performance 1981–1982 (Outdoor Piece) hosted on their Vimeo channel.

You should totally watch it. It’s really awesome.

It feels a bit fatuous “reviewing” something that you, the reader, could just click a link to and watch for yourself for the next two weeks, so in this instance the first job of the critic is just to give you a bit of encouragement to do so, and the second to maybe provide a bit of context (which, frankly, you could Google for yourselves).

However, a) the film won’t be online forever, b) I want a record of what I thought seeing it, and C) Tim Etchells created a one-off 30 minute performance, which only the people in the room saw, so THANK GOD, there is a point to me after all. 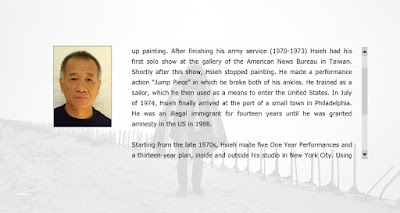 Which is elliptical and modest. The dry descriptions of his works on Wikipedia give more idea of what is involved with One Year Performance 1981–1982:

“In his third one-year performance piece, from 26 September 1981 through 26 September 1982, Hsieh spent one year outside, not entering buildings or shelter of any sort, including cars, trains, airplanes, boats, or tents. He moved around New York City with a packbag and a sleeping bag.”

From this, you get a sense of what you might have to imagine, what you might have to think about. But the film helps you imagine further. Obviously, at only half an hour long, it can’t hope to give any real sense of what it was like to stay outdoors for a year, but feeling the weight of material edited out, or never filmed, works well. You look at Hsieh’s serious, impassive face and probably project a lot of your own feelings and anxieties onto his task. You look at the now 35-years-ago streets of New York and notice the differences between the film and the idealized versions you see in the cinema now. You see Hsieh bedding down with the down-and-outs of NYC, and think to yourself, hmm. You think about being cold. About being rained on. About never going inside.

Even the film as an artwork is provocative and troubling. Christ knows what The Artwork itself must have felt like. And you think about what “The Artwork” was. How far did it radiate from Hsieh? Was the whole of New York involved, complicit for that year? Was everyone in the City implicated in the artwork? What does an artwork of that size and scope mean for a city? I love, as well, how white-noise the film is. How so much of it is compromised silence. Or the sound of winds buffeting a microphone at high speeds; perhaps more familiar to us now from badly timed phone calls.


Tim Etchells’s piece accompanying the screening at LADA seemed – to me – to be a variation on the style explored in Seeping Through at Forest Fringe in August (and I say that, largely because that was my first experience of this particular mode in Tims performance work. For all I know, he’s been making pieces using this style for a lot longer and I just haven’t seen them).

The style, as I described it then, is: “Each repetition of a line has a different emphasis. The lines – or, let’s be honest, not “lines”, but fragments of text, sometimes just a few words – intend something different thing every time.”

The key difference here was the duration. Brought down from five hours to 30 minutes. The other main difference is that rather than a live violinist, the performance was scored by the soundtrack of the film, with Etchells also able to refer to the film itself on a monitor.

There was also more sense, for me, of physical movement being key here. The performance starts with Etchells holding his right hand out, away from his body, for minutes before speaking. Having seen the same gesture before as a component in Ivana Müller’s While We Were Holding It Together, I was quite up for seeing the same thing again. Sadly, the arm didn’t stay in the same place for thirty minutes, but then, as I say, I had seen that done before... This fact, though – the idea of movement, physicality, choreography – in turn reminds me that Tim is just back from creating one of the first of three new pieces with Pina Bausch’s company, Tanztheater Wuppertal. At the same time, I marvelled that it was still possible to do this. To come and see this event, for free, on a Monday night in Great Britain in 2015. It felt like the sort of thing that the government’s “austerity measures” should have put a stop to by now.

The text of the Etchells piece (which I don’t think had a title), was largely phrases to do with time. Which I found really interesting in the context. Perhaps it was because I knew he was performing to the soundtrack of the film, and the film was finite at 30 minutes, but it felt, as a result, even while thinking about time, that this concentration on time, and knowing there were only 30 minutes in the frame here, made it feel more about rush and possibility than the almost unimaginable length of a year outdoors. Which was perhaps the point. The stark contrast between 30 minutes indoors and 525,600 minutes outdoors. I’d been struck far more by other – perhaps incidental – moments in the film, so perhaps the performance had the useful effect of clarifying an element about which I hadn’t thought much.

As an evening; as a thing to do; as a place to go; and most of all as a thing to think about, I really liked this a lot. More of this sort of thing, please, world.
Posted by Andrew Haydon at 19:58