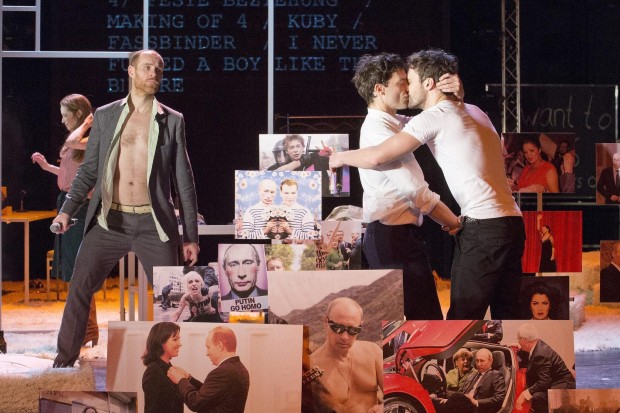 It’s strange. In Berlin theatre terms the Gorki Theater is leading something of a renaissance. It’s recruited pretty much the only ethnically diverse ensemble in Berlin, or Germany, really, that I’ve ever noticed, and is actually tackling topics like immigration, post-migrant status, and now, here, gender politics and homosexuality. The ethnic diversity thing feels way overdue and pretty much crucial. I was much more surprised that “gay theatre” should turn out to be *a thing*. After all, living in Berlin, with its gay major, the work of Rene Pollesch, its massive gay scene, and its apparent complete acceptance of all things queer, it doesn’t feel like there’s so much need for a piece like this exploring it all.

Small Town Boy (STB), however, makes a strong case for its own existence. It’s a project created by the writer and director Falk Richter. I don’t know enough about the circumstances of its production to say *how* precisely it was created, but I can describe what I saw and perhaps speculate a bit.

The starting point for STB is the Communards song of the same name. One of the performers (Mehmet Ateşçi, Niels Bormann, Lea Draeger, Aleksandar Radenković, Thomas Wodianka, I think this would have been Bormann, wearing a long straight seventies wig) offers what sounds like a heartfelt autobiographical account of their own parallel experiences to those described in the song, reading Burroughs, watching Fassbinder, listening to Lennox and Bowie, and needing to get the hell out of small-town Bavaria.

Actually, the piece feels quite like a gay version of Blurred Lines (the NT theatre piece, not the song), albeit running at 2hrs not 1hr10, and taking a lot more time with the songs that intersperse the action. There’s a similar mixture of scenes popping up with no particular introduction exploring similarly trope-y relationships. But here, rather than feeling like stock situations, the pieces feel freshly minted and might be verbatim, or else autobiographical. This yields mixed results. While the object of the projekt (as it is titled, we might say “devised piece”) is to explore: “Is it possible to be a different kind of man? A different kind of woman? Can you ever stop being a son or daughter? Is it possible to reject authority, and live and love in a different way? Love, in theory and in practice, appears to still be the discursive battlefield on which our many contemporary conflicts about gender, sexual and cultural identities in everyday life are carried out. What can and should a ‘man’, a ‘woman’ be today? How will we define family, nation and belonging in the future?” it does sometimes veer close to being a bit of an exploration of #erstenWeltprobleme, while some of the meta-theatre stuff, where we’re being shown scenes purporting to be about the making of a theatre projekt about homosexuality, feels maybe a bit to self-referential to no especially effective end, even if these scenes are among the more amusing. There’s also a rather protracted sequence taking the piss out of Fifty Shades of Grey, and suggesting some sort of link between conservative business-women and the fetishisation of migrant men. To be honest, this part could very easily be construed as catastrophically cheap and not a little misogynist. Indeed, from the point early on where in Bormann’s monologue the group enact paroxyms of disgust at the advances of a somewhat over-physical mother, it does seem that women occupy a largely secondary place in the pecking order here. There’s only one on stage, and she seems to have the least autonomy as a performer.

However, there is another element to Small Town Boy. For about half an hour, very close to the end, there is a remarkable monologue. I don’t think I’ve ever seen anything like it in the theatre before. It is direct audience address, but it’s mostly aimed at people who aren’t in the room. Angela Merkel; Vladimir Putin; the Putin supporting soprano Anna Netrebko, who sings in Tchaikovsky in Vienna; Ilse Aigner; and Erika Steinbach. It’s just a direct, frank attack, in speech form, against Russia’s homophobic laws, Germany’s lack of equal marriage, Merkel’s standing shoulder to shoulder with Putin and never once commenting on his regime’s appalling stance. And then wider, on to the Catholic church, right-wing, bigoted politicians in Germany, the war being waged against the gay community. It’s a remarkable, scorching, bruising piece of rhetoric, and one which gets several spontaneous rounds of applause. Of course one could say that Wodianka, who performs it, or Richter – who presumably wrote it (?) – is/are preaching to the choir here – the audience at the Gorki is, after all, self-selecting. But then, perhaps this level of anger *is* refreshing to see. Certainly it was for me. As my opening comments suggest, there might be a certain level of complacency, especially in large metropolitan centres, about the need now for this sort of work. But clearly there is a need. And it’s good to be shocked into feeling properly angry about injustice, rather than knowing, intellectually, that it’s going on, and, yes, oh, it’s very bad.

On another hand, I do wonder if the concentration exclusively on Russia, while ignoring Uganda and so on, doesn’t wind up looking a bit racist – like we can only reasonably expect white folks to have humane laws regarding homosexuality. And I did wonder about just how important the more maundering sections in the middle about how bleak it was being a single man in Berlin were. Against this, there’s also some quite good stuff, generally, about love, and people stopping being in love, and then there’s some – I’m guessing writing by Fassbinder – about how the institution of marriage destroys people. Although this is more at the level of “quite interesting historically” than “at all convincing”.

As you’ll have noticed, this review is all about the content, and precious little about the event as a theatrical experience. To be honest, that’s pretty much how it feels. There is staging, some of it even mildly inventive (although no inventions you haven’t seen before), but it mostly this feels like a content delivery system. There’s minimal fuss, a stripped-back aesthetic, stark projections and use of metal stands and picture. And the performers are without exception kind of remarkable and sparklingly charismatic, while at the same time being somehow unshowy and incredible casual-seeming.

So, yes. Bunch of music, some of it gorgeously sung, some very timely political intervention, and quite a bit of First World R/ship Angst as well. But, despite a few longeurs, ultimately Small Town Boy is a vigorous, angry, and bruisingly harrowing look at the modern world. Well worth a look if you’re visiting Berlin. (and, being the Gorki, always surtitled into English.) 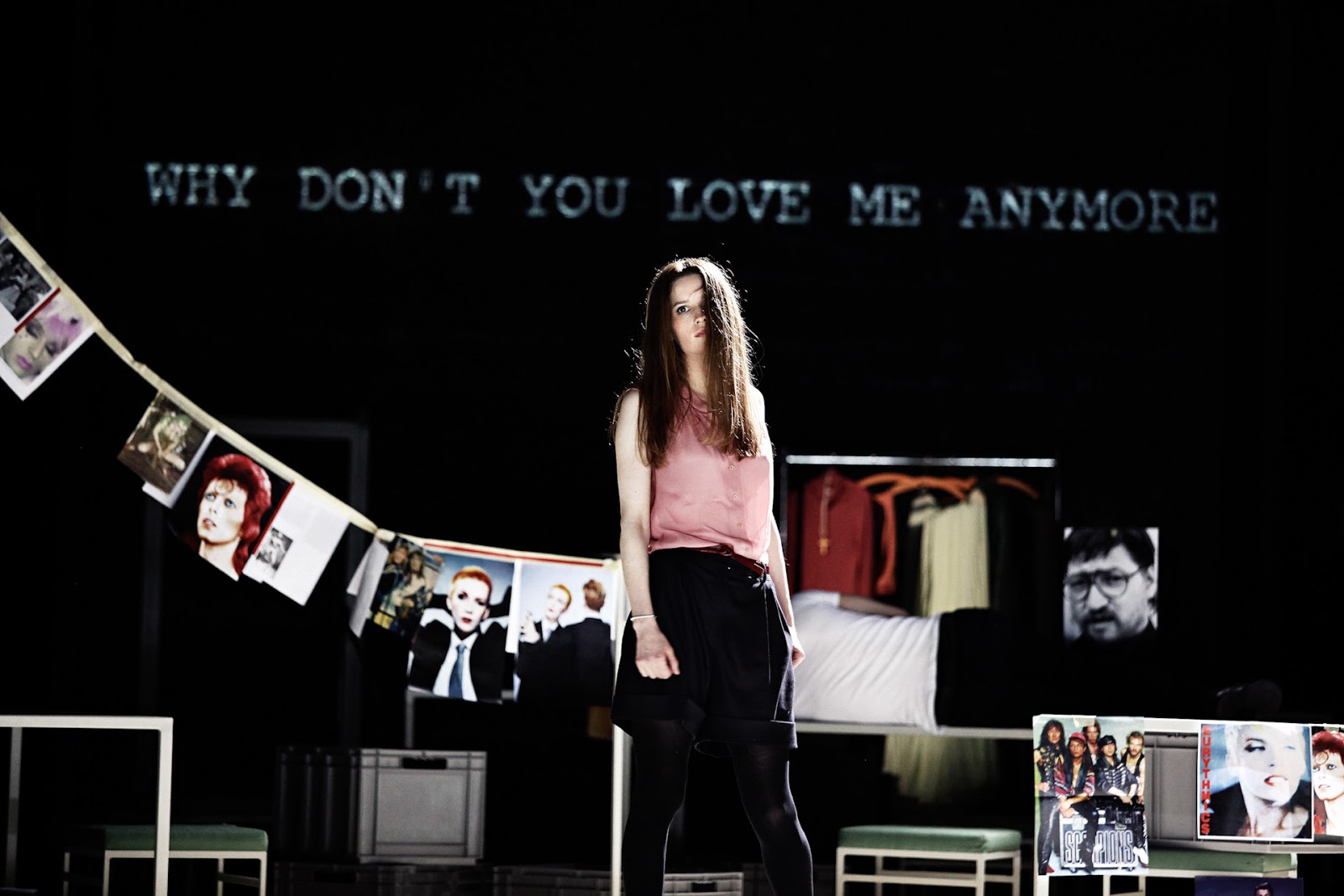 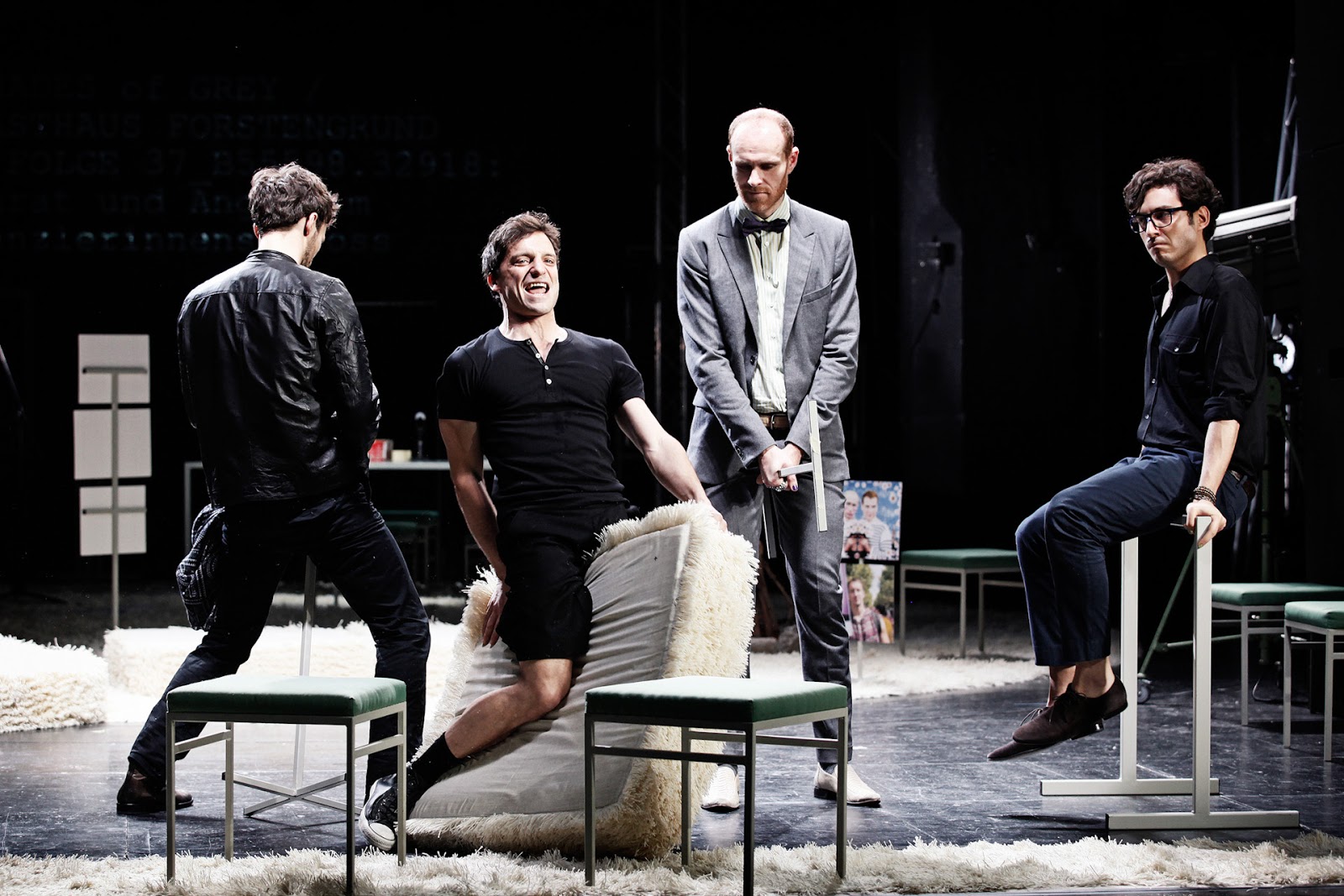 I wanted to let you know about a new musical touring the UK this Spring called ‘Miss Nightingale’ that I thought might be of interested. Miss Nightingale is unusual because not only is it a totally original British musical but because it has an honest, passionate and moving gay romance right at the heart of the story.

You can find more about the show www.missnightingale.co.uk

It would be wonderful if you were interested in coming to see the show.

Really enjoying catching up on a month's worth of missed posts. This is all very rich, Andrew: thanks as ever.

Just dropped in to this slot to say: Bronski Beat, not Communards. I've no idea why I should feel this matters, but I do. Perhaps it feels important that the ubiquitous Reverend Richard Coles gets none of the credit.