[Just when I thought I was out... they pull me back in] 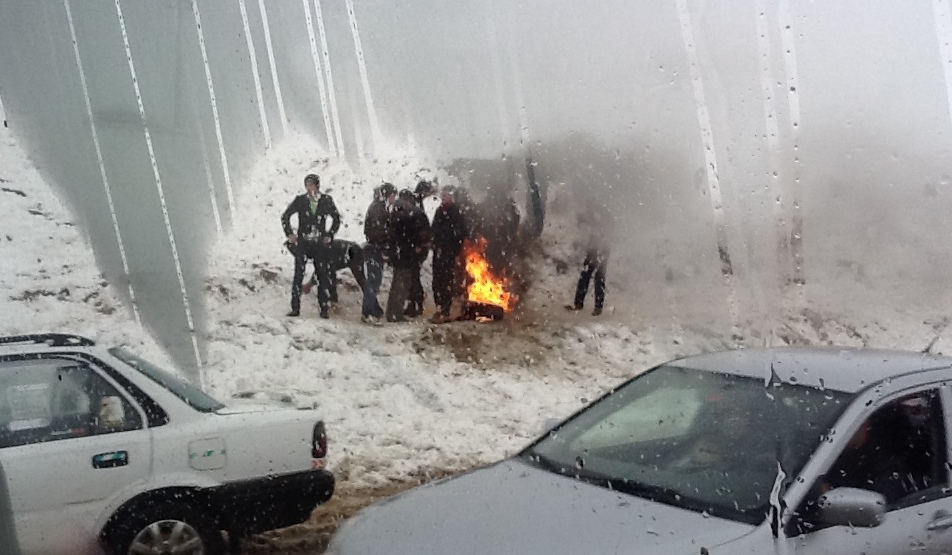 Embedded below is a link to the fascinating discussion about Embedded Criticism which took place last week at Brock University, Toronto at a colloquium on theatre criticism convened by the excellent Karen Fricker, starring friends-of-Postcards... Maddy Costa and Andy Horwitz (elsewhere from the same series there’s also an excellent round-table about the state of Canadian, or Torontonian criticism featuring Postcards’s favourite German-Canadian Holger Syme).

Being the person who coined the term (although certainly not the concept/s), it feels high time to reflect on the original concept, and how far it has since then.

The three original articles were :

What’s interesting is that fact that in none of them do I really seem to be talking about spending time in rehearsals. That seemed to take off after those essays. In the original “Embedded” pieces, I was talking firstly about spending time with ATC in the back of a tour van in Iraqi Kurdistan in March 2012 (hence “embedded”), and then about wider questions related to knowing artists, being friends with artists, knowing artists’ intentions, the position of the critic in relation to the work, and about pre-knowing information about a piece.

Looking back, it is clear that I was concerned with renegotiating the contract between both critic and artist and also critic and reader; concerned with seriously interrogating the strange assumptions in the rules of mainstream criticism that project a critic with a false “exteriority”. A critic who is “outside” the world that she reviews.

Since then, “embeddedness” has gradually come to mean “spending time in the rehearsal room”.

What’s also fascinating is the extent and variety of ways in which it’s been used, experimented with, and tried out. Maddy with Chris Goode and Company, Catherine Love with Greyscale, Matt Trueman, both at Oval House and at the China Plate/Warwick University series This is Tomorrow, and myself in the RSC/Wooster Group Troilus and Cressida and Secret Theatre rehearsal processes.

I think spending time inside rehearsal processes has been an incredibly useful exercise for me personally. It’s certainly made me rethink the lazy shorthands that exist for attribution within reviews – that “the writer means...”, that “the director decides...”, that “the actor shows...” – You appreciate how much more multi-faceted and collaborative *all* theatre-making is. Not just yer “art performance installation sort of bonkers thing” (Shoot/Get Treasure/Repeat).

Also, it makes you appreciate that even when spending all day, every day, for several weeks, that you actually don’t ultimately *get inside* a piece. There’s still stuff you don’t see happen. Actors still go off and learn lines. Directors, designers, whoever, all go home, sleep on things, have sudden flashes of inspiration on the tube, wake up and scribble ideas down and go back to sleep. Of course you also learn about how visions get shafted by contingencies, how woods can get overlooked for a superabundance of trees. Most interestingly, you see how critics and theatre-colleagues arrive armed with interpretative faculties which can find genius where none was intended, or faults where a rigorous intellectual defence is available.

The very concept of “Embeddedness” being *a thing* also throws up a few assumptions that I realise are peculiar to British (and more specifically, London-based) criticism. Still, so many elements of our understanding of “how criticism works” are specific to the ecology with which we’ve grown up and which we see happening around us – the vastness of London’s theatre scene, the ongoing dominance of critics-who-have-always-been-critics, the either lack- or lack-of-acknowledgement-of- the fluidity between criticism and other jobs in theatre, the thumbs-up/thumbs-down consumer-guide understanding of “what criticism is for”. The more I travel and encounter, or read about, or hear about other theatre cultures, the more I realise that all these “hard and fast rules” are very much time and space specific. I mean, Christ, I’m not sure its an understanding of “how criticism works” that’s even applicable in Scotland.

Something else that came up as a possible objection to “Embeddedness”, both in the debate, and also, I seem to remember, as an objection at the NT’s Future of Criticism debate at The Shed was the idea that embeddedness would lead to critics who were “too *in bed*” with a production. And that they sure as hell couldn’t write about it. What I’ve found interesting, spending a bunch of time in rehearsal rooms, is that actually, embeddedness also offers precisely the opposite opportunity. That you can potentially end up with a critic who *deeply* dislikes a piece well *before* “press night”. Yeah. No one’s really talked about that, yet. So there’s also the question of what one does with that. And what one does with oneself in the rehearsal room.

I suppose part of what I’ve been arguing for is could be construed as something a bit akin to a UK adoption of something a bit more like the German “dramaturg” model, where they have the (building/production) “in-house critic”, who can critique a production and provide vertical and horizontal context as rehearsals progress. However, without being employed specifically as such, the potential for the embedded critic to provide these services could go untapped. Or, having next to no precedent in the UK, might seriously wrong-foot a director presented with them.

At the same time, the other side of what I’ve been arguing for is essentially professional development – simply the chance to learn practically about the nuts and bolts of the thing that we’re writing about the whole time. A chance to see how things are put together, but also a chance to undermine our own assumptions. A chance to see what does get talked about and what doesn’t; how decisions are actually arrived at; the degree of rigour actually involved; even whether rigour is actually any use.

While thinking about the difference between embedded criticism and other sorts of criticism, I wondered if the difference might be something like the difference between painting and photography. With painting you have to spend a considerably longer time with the subject and the result is necessarily far more personal and subjective than a photograph. That said, photography – lest anyone think I’m being partial – is also absolutely an artform; and is as much to do with the subjectivity and skill of the photographer. Obviously there are also snapshots, and pix taken on mobile phones. Some of which can also be beautiful. Just as much as some (many) paintings can be a horrible mess. I’m not sure if it’s a useful comparison, but I think it’s a helpful way of thinking about the differences, perhaps. After all, even between painters there are so many different schools – compare Monet to Richter to Bacon – that even acknowledging “embedded criticism” as a thing is not the end of the line for a discussion of it. People will adopt their own approaches. Shape the medium to their own tastes, emphasise what they wish and create their own versions.

And: NONE OF IT NEED NECESSARILY *REPLACE* ANY OTHER SORT OF CRITICISM OR BE BETTER OR WORSE THAN IT.

It’s just another thing. Ok? I’d just like to make that clear too.

For the record, I still very much enjoy (yes, I thought about this, *enjoy* is the word), going to see a production about which I know, well, anything between *nothing* and the *usual amount of information*, and writing about it as an act of interpretation, description, or, yes, even *journalism*. Sometimes knowing nothing and learning as you sit and watch can feel pretty dizzying too.


[Cover photo: another shot of the road between Sulaymaniyah and Arbil (Googlemaps-spellings), as per the original “Embedded” pieces. This one taken by Ramin Gray]
Posted by Andrew Haydon at 18:48

Long time since we last met and all that but just had to react here since I have been asking the same questions lately. And, being the vane person I am, I'll also send you a link to my artucle that was just published in Eglish: http://www.criticalstages.org/re-negotiating-professional-criticism/

I'd never thought of a dramaturg as an in-house critic before, but I love that way of framing their function.

i like the idea of "embedded criticism" and it seems to have a lot in common with the role of the dramaturg in germany.

there are several dramaturgs working at each theatre in germany. while they are bound to the productions they "mentor" and their role is to be the outside eye (or the first spectator as we say in germany) FOR the production in order to influence the rehearsal process and to "optimise" (horrible word for an art process...) the outcome, the embedded critic is accountable to none. that is a great idea, but is it realistic?

i doubt that artist want to let critics who didn't like their work several times (or even once?) in the inside again... so i think there is the danger that embedded criticism becomes a form of advertisement since it needs the approval of the artist to be able to happen...

This concept of "embedded critic" has a LOT in common with how dramaturgy is practiced (at least in-the-rehearsal-room-and-producing-research production dramatugy) in the United States too ... as in fact document in the Mark Bly two volumes of PRODUCTION NOTEBOOKS (vol 1 published 1996, vol 2 published 2001), and much in common with the "new journalism" of Lillian Ross in the New Yorker series later published as a 1952 book called PICTURE (about being "embedded" with John Huston and his film crew making RED BADGE OF COURAGE) and Ted Chapin's 2003 book about watching the evolution of the creation of FOLLIES. The idea being discussed here is not new; the function has been practiced in many ways over a number of decades. The roles of observer, participant, journalist, critic are actively being analyzed. I haven't yet seen evidence of a real unique new concept behind "embedded criticism" other than a new name for an ongoing endeavor. [full disclosure -- I am a member of the Literary Managers and Dramaturgs of the Americas, the American Theatre Critics Association, and the general editor of CHANCE Magazine where we currently are engaging with this idea.]