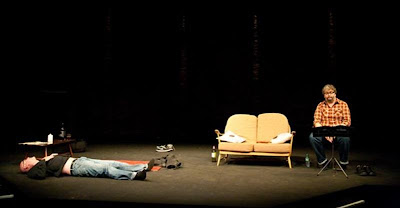 what happens to the hope... is a new piece made in collaboration by a smith, Karl James and Tim Crouch, the same team who made The Author. But where The Author was a play written by Crouch, directed by smith and James, the text of ...hope... is attributed to smith and Crouch, who also perform.

If The Author – with its performers sat amongst the audience and mode of direct address – was formally “difficult”, then ...hope... is both more and less so. Plonked on the un-dressed stage of the Almeida, it both does and doesn’t look and behave as theatre should. a smith (playing “Andy”, a character who appears to share many autobiographical details with Real-World smith) is sat on a chair behind a music stand with the script placed on it. He talks directly to us, the audience. He asks the usher “is everyone here who said they were coming?” He’s really there. He might almost be really himself. We’re really there too. And he’s talking to us.

Crouch is playing smith’s friend (called “Friend” in the script). Crouch’s performance of “Friend” is even more theatrically complex. He’s definitely on the stage with smith, and he doesn’t sound unlike Crouch, but as rapidly becomes clear, “Friend” is probably not very like Crouch. For a start, there’s almost a chippy resentment in the way he stands (resenting the fact that he can also see the audience and they can see him?), certainly in the hectoring way in which he addresses smith. Firstly in a “phone-call” and then in person.

smith (or “smith”, or Andy) seems slightly pained and discomforted by “Friend”, but addresses him at all times in the manner of a calming therapist, or perhaps hostage negotiator. He calls him “mate” an awful lot too, deploying the word like a series of verbal halt signs. When “Friend” arrives at smith’s house, he almost immediately begins to populate the stage with bits of furniture, which he goes and fetches from off-stage. “Friend” even seems to resent having to do this. As if to say: if you’re going round to your friend’s house, they could at least make sure some naturalistic furniture was put out before you arrived so you didn’t have to pretend. When smith suggests that something might be in the kitchen, “Friend”’s derisory laugh seems to indicate his disgust that there’s clearly no such kitchen on this stage, and moreover at the lack of a possible set designer who could have solved this oversight.

In this respect, it would be very easy to view what happens to the hope... as an amusing exercise in meta-theatre – the story of a progressive, avant-garde-ish performer, au fait with gentle, lo-fi staging techniques suddenly being visited by some monster of ‘70s, or ‘90s realism – that “Friend” is also chippy and violent adds to this impression, with his swearing and drinking and his talk of fighting and thieving.

And in part, I think that is what it is about. Where ...hope... gets more complex is that Andy’s Friend has turned up to visit him off the back of joining an anti-fascist protest in Bolton (“The EDL are planning a sort of quaint little reconstruction of Kristallnacht on the Chorley Road... We thought we’d come and say hello to the racists, you know, a little welcome party, show them the error of their ways. Like old times, remember?”). So, in some way, we might also be being asked to consider what the best form of resistance to fascism is. And this might also echo and reflect the culture-clash between the two sorts of theatre. The sense that this sort of theatre/thinking is (or was) a friend from whom we’ve grown apart, and this sort of anti-fascist violence is a force which we not only recognise but which we probably used to support if not take part in.

It’s not at all clear cut. For all that “Friend” is clearly a mess – we later learn that he’s thrown over a decent-sounding relationship for an affair and is clearly accustomed to drinking for too much on a regular basis – are we 100% sure that “Andy” doesn’t feel some discomfort at his pleasant, non-confrontational life as a lecturer in theatre studies at the University of Lancaster – at having “sold-out”? Isn’t some of “Friend”’s anger not misplaced? Aren’t some things worth fighting about?

I wonder if, in part, what happens to the hope at the end of the evening is a play about growing up. “the hope” might partly be raging youthful idealism. And in the question (or statement) of the title “the evening” could well stand in for one’s later years. What do we do with all that idealism when we realise that we’re older? And were the ways in which we practised this youthful idealism ever that ideal anyway?

Perhaps this is most strikingly captured in a single exchange:

ANDY      Well, maybe they should! Maybe it’s that simple, you know? Don’t fuck that person who isn’t your partner. Don’t open that third bottle of wine. Don’t make assumptions. You talk as if these things are out of our control, well maybe they are not.

It’s hard to find fault with either position, really. Or rather, it’s easy to sympathise with both points of view. Of course Andy comes off looking wiser and more mature, but I do wonder if his character doesn’t also contain a sadness at his own position.

There even comes a point a little later where I briefly wonder if Friend is even real: through the piece Andy has a refrain which runs “It is such-and-such a time. I am waiting for my friend”. On one level it can be read as a recap; on another, the sad reflection that the person who is/was his friend has yet to turn up – or the things he likes about his friend have yet to re-establish themselves; and then there’s the possibility that everything we’re seeing on the stage is imagined by Andy and to let us know that he keeps reminding us that he’s still waiting for his friend to actually arrive.

What is striking about the piece, is the very real feeling that this couldn’t be the product of a single author. I’m not precisely sure how the text was made, whether it was improvised, written separately and merged, pinged back-and-forth as an ever lengthening Word.doc, written by the two in the same room or a combination of all of the above. Nor, with this sort of project – performed by two writer/directors, is it easy to discern where Karl James’s directorial hand comes into play.

Because, alongside Friend’s chippiness, there’s also a playful, clownish element of just trying to de-rail Andy (or a smith)’s performance style. To really fuck it up. And this element of two obviously distinct styles and entities vying for control certainly gives the thing a whole new motor that singly-authored thesis-plays aren’t often able to fake.

What’s also interesting (though perhaps only to me) is that this is one of the last things I saw before seeing Circle Mirror Transformation and the first thing I’d seen in the Almeida since Chimerica. There’s an interesting moment in ...hope... – the follow-up to the above-quoted exchange, as it happens – where Andy says: “I don’t know if we know what we want anymore”. The “we” in this case feels like it means both society, and those of us present in the theatre that night. And, watching it on an Almeida press night, with a slightly Almeida-audience-heavy audience what it made me think was: “Well, what a lot of people want seems to be Chimerica”. Which was a thought that troubled me, since ...hope... is a piece that, for all its "roughnesses" and “imperfections”, speaks to the world a good deal more directly and urgently than the finely tuned detective story with added research and social comment does. But obviously it’s not the thing that’s got the West End transfer. And probably never will be. (Although, if it sits funnily in the Almeida, how much more funnily would it sit between the gilded pillars of a West End stage? And why oh why is the West End transfer the only measure of success in British Theatre anyway? etc.)

Similarly, the dynamics and way of exploring some pretty fundamental, pressing ethical questions about what we do, how we should live, how we should act. I do wonder if it wasn’t this combination of simplicity and range that made me that bit less accommodating toward Circle Mirror Transformation (although as Dan Hutton’s new review succinctly puts it: “Throughout, however, I couldn’t help feeling that though [CMT] had strong bones and a beautiful exterior, the flesh itself was not quite meaty enough”). It was this aspect that made me wonder at the comparisons with Chekhov that the piece had attracted. I suddenly realise I couldn’t think of a single play by Chekhov in which the characters weren’t engaged in a conversation about the wider society in which they lived. Big conversations about the direction of art or of massive social upheaval. And this is the difference between ...hope... and CMT – on the face of it, ...hope... is just a story about two former friends meeting up again, but what they talk about, and the way they populate the world beyond the stage with images and ideas so vivid that you’d swear you were shown photos of them, makes this piece incredibly powerful and outward-looking.

what happens to the hope at the end of the evening is an object lesson in what political theatre can look like, and a striking illustration of how structural difficulty, collaboration and multiple-authoring are perhaps a deeply necessary part of it. 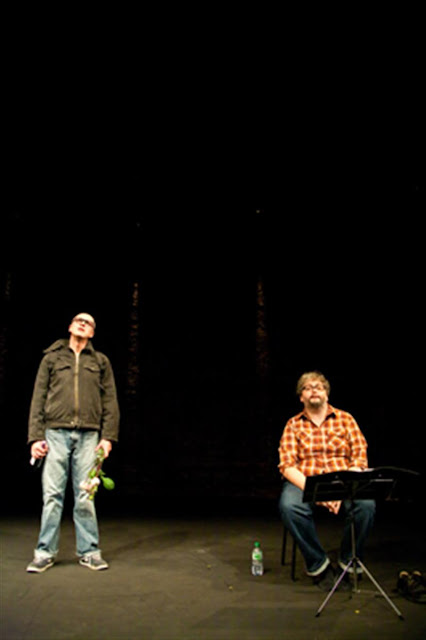