A Season in the Congo – Young Vic

[written to word-count due to time pressures, and because it makes Trueman happy] 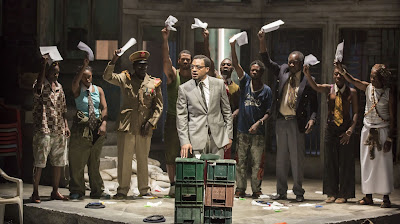 Martinican Aimé Césaire’s 1966 topical drama A Season in the Congo offers a pretty straight-forward run at events in what was the Belgian Congo, between 1955 until a year or so after its independence in 1960. Film director Joe Wright’s theatrical début (as far as I can make out) delivers it with a surprisingly unfussy theatrical élan.

Indeed, it’s tempting to say that the production here outstrips the play. Césaire’s text (at least as far as we can guess it from the production: the programme isn’t a playscript) is very much of the rolling-events school of historical dramatisation. The major players – Congolese Prime Minister Patrice Lumumba (Chiwetel Ejiofor), Colonel Mobutu (Daniel Kaluuya), Katangan secessionist leader Moise Tshombe (Brian Bovell) and UN Secretary General Dag Hammarsköld (Kurt Egyiawan) – all dash on stage with their supporting casts and deliver rapid, functional dialogue outlining mostly recent events and their ideological position to them. There’s a fairly literal, Brechtian quality to it all, from which Wright extracts a mapcap energy.

What Wright (and possibly more so his co-director Sidi Larbi Cherkaoui) also bring to proceedings are a bunch of nearly-narrative dance sequences, musical breaks and increasingly amusing wry, philosophical interjections from the Likembe player, Kabongo Tshinsensa. Indeed, as I followed the action in the programme’s timeline of events as the scenes rolled, I did wonder what a piece made solely of these “scene-changes” might have felt like. But the staging of the text also yields plenty of fine moments. My checklist of what these are more-or-less identical to Quentin Letts’s list of complaints, except I thought they were all excellent additions: there are “Muppet-style puppets playing a chorus from a gallery. At another point, toy parachutists float down from on high, to represent a Belgian re-invasion. European evacuees are shown by tiny, Chapman Brothers-style figures being pulled across the stage. The American and Soviet ambassadors are... played by black actors — as are the Belgian colonialists, who sport oversized fake white noses, to distinguish them from the Congolese.”

In fact, this last point (contrary to Letts’s concern that “colour-blind casting is wilfully self-destructive here, failing to seize a chance to accentuate the arrogance of the white powers”) is a particularly fine innovation. Instead of recolonising the stage with a bunch of white actors graphically demonstrating imperialist oppression, the device unfussily satirises it in a way that is at once completely comprehensible and totally theatrical.

However the real stand-outs of the night are Ejiofor and Kaluuya. Ejiofor (who I’ve not seen on stage before) really is a strikingly charismatic actor, and in an age where “charisma” is not really the done thing, he reclaims it and makes an outstanding case for it, the few political speeches he is called on to make are suddenly electrifying and vital. And while Kaluuya has the more thankless task as the unsympathetic usurping dictator-in-waiting Mobutu he seems to effortlessly embody the necessary low cunning and pragmatic violence.

If there are “buts” then the length and infrequent longeurs in explain-it-all dialogue are two, but perhaps more so is the “unreliable narrator” quality of the script. Granted, there are good historical reasons for this – Césaire was a committed anti-colonialist at a time of violent struggle (in a similar vein to his communist contemporaries who might still have sought to excuse Stalin’s crimes). However, looking back from the (doubtless unhelpful) ethical safety of the early 21st century, one can’t help being concerned by the initially triumphalist and unquestioning tone the piece takes toward the massacres ordered by Lumumba against secessionist regions of South Kasai and Katanga, painting these secessions as unambiguous power/land-grabs by Belgian imperialists and the UN’s condemnation of the massacres (genocides in the play) as reactionary. The massacre of a lot of native villagers is hardly excellent anti-imperialism, whichever way you want to cut it. And is the preservation of the national borders of a country arbitrarily stapled together for a number of disparate tribal regions by the Belgians really a laudable ambition? It wasn’t a country before imperialism. Why would the first anti-imperialist government of a de-colonised country wish to enforce these borders with such an iron will? Of course, I have no better answers than the play, but I don’t think it would hurt if the production had questioned the ethics of the text more.

Nevertheless, this is ultimately a laudable, bold bit of programming and well worth watching, not only for the rare chance to see the play at all, but for some fine staging and excellent performances.
Posted by Andrew Haydon at 17:22