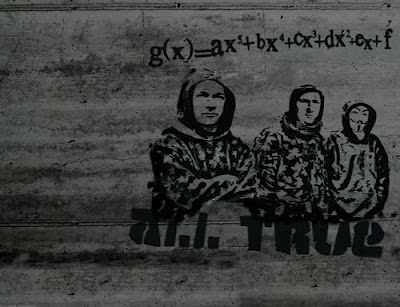 It feels a bit funny going back to the Gate after spending more-or-less a whole fortnight there. Even funnier going to see a “proper show”.

Even so, it's striking to wander into the Gate and see the stage has actually been painted! Red! There's a set, of sorts – well, no, let's be honest, the stage has been painted red, with a white divide down the middle, and there's a table on it, and on the table there's a model box of the stage of the Gate, painted red exactly like the real one has been. This model even has a little table in the middle of it, and in the middle of *that* table... And so on.

This turns out to be an incredible neat – and, for a mathematical illiterate like me, nigh-on indispensable – visual aide for the main subject of this show – essentially a mathematical problem.

The problem, written on one of the two boards – one on either side of the stage; one black, one white – is expressed thus:

I think, *think*, this is a polynomial equation. These were an abiding concern of the teenage French mathematical prodigy Évariste Galois. Here's what Wikipedia tells us about him:


“While still in his teens, he was able to determine a necessary and sufficient condition for a polynomial to be solvable by radicals, thereby solving a long-standing problem... A radical Republican during the monarchy of Louis Philippe in France, he died from wounds suffered in a duel under questionable circumstances at the age of twenty.”

Note the dual appearance of the word “radical” there. This is pretty much the crux of this show.

The way the piece is structured is essentially part lecture, part cosy chat, part mathematical equation, and part audience-participation (all very gentle stuff, fear not: they give us tea and biscuits, someone goes on stage to shoot Galois in his duel, seated members of the audience are addressed as characters from Galois's life and we all stand up to sing La Marseillaise).

The two performers, Jon Foster and Lucy Ellinson play Galois and Julian Assange – although in that performance style of “being themseves” and relying on us to fill in the distance. Ellinson (also a friend) does (very passable) Australian accent for about a minute before declaring that to be a silly idea and reverting to her own speaking voice.

As it happens, a greater proportion of the show is taken up with explaining the short life and apparently extraordinary work of Galois. No bad thing, since Assange is a well-enough known entity for (I'd imagine) (most of) the audience to have a bit of background and an opinion on beforehand, whereas Galois was a completely unknown quantity to me.

What's clever, though is the way that – like an equation – the same things have to be done to both sides. So after a long while of Assange, er, *leaking* the facts of Galois's life, Galois turns on him and demands parity, reading off a long list of the current charges against and pro- Assange.

By even putting these two figures in the same equation, I think the show comes out rather less ambiguously pro-Assange than might be to everyone's taste – although [FAUX SPOILER WARNING] a mathematician friend did work out the equation at the heart of the show, noting that it couldn't be solved by radicals and there was not enough information – which is a pretty neat conclusion to draw when all the information isn't in yet [END OF FAUX SPOILER WARNING].

The constant refrain of the show is: “the radical simplifies”. The refrain is drawn from mathematics, but the meaning here is dual at the very least. Lucy and Jon take small cardboard versions of themselves and move them around the set, but at the end, a third figure, its head represented by one of the smiley-faces used in the model box to represent a member of the audience is introduced. It is placed on the chair and set alight. Although neither the name Mohamed Bouazizi nor the words “Arab Spring” are spoken, the parallel is clear: here is a radical simplification of a problem down to its most basic, essential elements. And that is how you solve the problem.

If I were to table caveats, one might be that Lorne Campbell and Sandy Grierson's script (directed by Campbell) perhaps avoids the “Explain what you're going to do, tell us you're doing it, tell us what you've done” formula of teaching a little too much. Although this can also definitely be argued as a positive virtue. As it is, it does feel as if while we as an audience have a shadowy inkling of what the show is doing and where it's taking us, it feels like precise clarity, or a sense of crystalisation takes a long time to show up. On the other hand, this might be precisely what makes it so satisfying when it does arrive, and could be precisely the mechanism by which the conclusion is rendered so surprisingly moving and powerful.

Because, in many ways it is one of the most eloquent, rational explanations of revolutionary thinking I have ever encountered. By expressing this thinking as a mathematical formula, the show could be argued to be under-nuancing a process as much as it is “simplifying” it, but perhaps once in a while a bit less hesitancy and a bit more proactive pro-activism is necessary.

[EDIT:  My friend Ben Curthoys, who actually studied maths (and runs this excellent ticketing software company) has just sent me this critique of my critique:


I think you might have missed the point there a bit, Andrew.


The radical simplifies, yes. It simplifies quadratic and cubic and quartic equations, every time.


And Galois theory proves that there IS NO general solution to the quintic. It's nothing to do with there being "not enough information". No general solution exists, has existed, can ever exist, even in the future when we have much cleverer mathematicians and bigger computers. Maths is like that.


"Because, in many ways it is one of the most eloquent, rational explanations of revolutionary thinking I have ever encountered."


Yes, but not in the way you think it is. Jon Foster spends a lot of time on stage clutching his forehead and searching for the how, and the moment he realises that the question should be "why" instead is actually easy to miss.


If you make that a metaphor for politics, then that means that the revolution that's required is for people to stop going round asking "How do we fix genocide / Nestlé / famine / war / pestilence / death", but "Why do things keep going wrong?".


And what Galois proved is that for sufficiently complex polynomials, and by extension then human problems, there is no systematic solution, the radical simplifying approach simply does not work, and that we have no choice but to live in a world were some problems have been proven to be insoluble.


You might want to compare the other most famous negative result from mathematics: Any system capable of expressing elementary arithmetic cannot be both consistent and complete: for any such system, there is an statement that is true, but which cannot be proved.
Posted by Andrew Haydon at 17:48