[Written for The Stage] 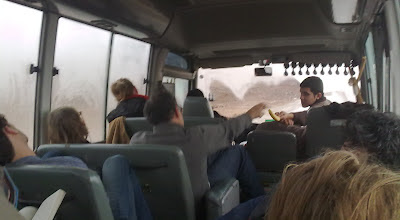 I'm sitting on a mini-bus driving through snowy mountains with several elderly Norwegians, five British actors, an English-Iranian director, a Welsh producer, a Scottish stage manager, and various Kurdish fixers, translators, drivers and hangers on. We are listening to very loud Arabic music. There is much clapping and dancing.

Welcome to the Middle East. Welcome to the first Suleimanyah International Theatre Festival, in Kurdistan, Iraq. Welcome to ATC's travelling production of German playwright Roland Schimmelpfennig's The Golden Dragon. A play about Chinese immigrants in Europe.

I'm not really sure what I was expecting from an international theatre festival in Kurdistan. I approached the whole thing with a fair amount of trepidation. Ok, so I'd read the Foreign Office reports saying Kurdistan was as safe as houses, but it was still technically part of Iraq, right? And all I'd ever seen of Iraq was footage of bombs exploding in hot, sandy market places, soldiers running to and fro, and bloodied bodies being stretchered away. Wrong. If anyone had shown me a selection of the photos I took on the trip and asked me to guess where they were from, I would have probably guessed Poland or Russia. 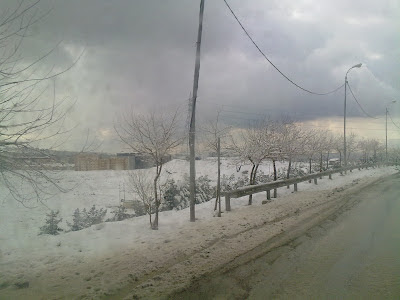 A bit of history: while Kurdistan is still technically a part of Iraq to this day (independence is a much-debated issue), following Saddam Hussein's failed invasion of Kuwait in 1991, the Americans (and British) drew up a no-fly zone on the “36th parallel”. This effectively meant that Kurdistan was now protected from a repeat of Hussein's genocidal al-Anfal campaign of the late eighties, which saw between 1,100,000 and 2,150,000 Kurds murdered in death camps and nerve gas attacks on their villages. As such, when the 2003 invasion kicked off, Kurdistan was left largely unmolested. They were no fans of Saddam. Go right ahead and kick his ass, seems to have been the general consensus.

The drive from Suleimanyah International Airport is telling. On one side of the road is a high concrete wall replete with armed sentries (protecting what from whom was never fully explained), but on the other side of the road is a brand spanking new American University. Whilst being far and away the most *foreign* place I've ever been, there is still a clear Western, American influence beginning to show. The company spent one evening in a café with a bunch of locals who were all merrily checking their iPhones, Facebooking on their MacBooks and drinking Heineken.

That said, there seems to be precious little/no professional theatre in Kurdistan. Therefore, in Suleimanyia, the company's first issue was finding a space in which to perform. The space in which the company had been slated to play was the same venue as the grand opening of the Festival – a giant barn of a concert hall, that would be perhaps best suited to a massive orchestral performance. It was less suited to a small, intimate avant-garde piece transferring from Traverse 2 and the Arcola. Imagine putting 4.48 Psychosis in the London Palladium, and you might get some idea of the problem.

The organisers were very understanding and obliging, though, and the company spent a good ten hours of their first day first trooping round possible alternative venues, eventually settling on a slightly lecture-theatre-y space (not unlike London's Shaw Theatre, come to think of it), equipped with at least a rudimentary lighting rig, and a somewhat wayward lighting board.

Another issue slightly worrying the company was the nature of the material itself. We had all been made aware that this was an Islamic country. Quite a liberal Islamic country, but still somewhere where drinking was frowned on, women were expected to at least dress modestly, and presumably where homosexuality wasn't exactly flavour of the month. What were the audience going to make, then, of a play in which men frequently put on dresses and played *very* immodestly dressed women, in which “sex-acts” are simulated, and in which several characters get copiously drunk? Were they unwittingly staging a time-bomb of cultural insensitivity? Ramin had said he'd checked everything in the staging with our hosts and they'd said it was all totally fine. But, it was hard to dispel the faint sense of foreboding as the company took to the stage for the first performance.

The theatre was rammed. Thanks to an abundance of health and safety laws, and basic fire drill precautions, you can usually tell how many people are in a “full house” in the UK simply by knowing the number of seats. Not so in Kurdistan. When the actual seats ran out, additional punters simply started filling up the steps on the aisles.

Would there be one of the region's periodic power-cuts mid scene? Would the company trigger a mass exodus of disgusted patrons and full-on diplomatic incident with their full-and-frank staging? Would the lighting board even hold out until the end?

Ladies and Gents, we really needn't have worried. Rarely have I sat in a theatre with such a high quality of attention. Laughs came loud and hard in exactly the right places. Audible murmurs of compassion washed round the space in the poignant moments. The level of engagement and concentration were palpable. This was a dream audience. And the applause afterwards went on for what seemed like forever.

After the show the actors could hardly leave the building for people wanting to thank each and every one of them personally. When we got to the restaurant we were eating in that evening the whole place burst into yet more wild applause. Apparently everyone in town had been at the theatre.

I confess I was mildly baffled about what had prompted such a reaction. Sure, I liked the show plenty. I wouldn't have volunteered to get “embedded” if I hadn't at least *liked* the show, but I was slightly doubtful about its potential cross-cultural appeal. What did a lot of late-capitalist, post-modern, German angst about the plight of Chinese immigrants have to say to an oppressed people in the Middle East?

Apparently plenty. Everyone seemed to have experience of immigration, having either fled Kurdistan at some point, or having had family members or friends who had done so. And beyond that, there was gratitude for the sheer fact of our having made the effort to travel there at all.

Kurdistan is a very young democracy, and some of the things people we met there said suggested it has teething problems. But the stated mission of the first Suleimanyah International Theatre Festival was to provide an opportunity for Kurds to be inspired by culture from abroad and for it to play a part in the rebuilding of society and the democratization of Kurdistan. Of course, it's impossible to gauge immediately what effects the festival might have had, but it felt like hundreds of vital seeds were sown by this first Festival. I can't wait to return for the next one, and I hope many more British companies will be invited over the coming years. 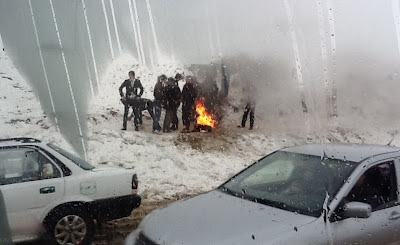