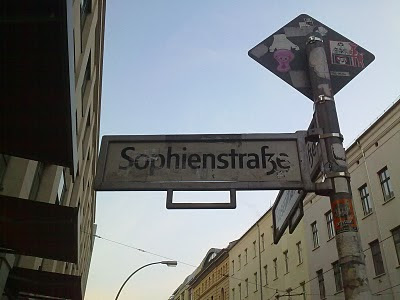 I admit it, I’m green with envy. No sooner than I bugger off back to Berlin does the ICA offer a whole weekend of brilliant-looking, Shunt-curated Live stuff . For FREE.
Happily, Berlin hasn’t let me down. This weekend it’s 100° Berlin - vier Tage marathon Festival des freien Theaters; a collaboration between Berlin’s two biggest free theatres, HAU and Sophiensæle. Sadly, “free theatre” here doesn’t mean it is free, it’s just the German word for the off-scene, or “fringe” as we might, sort-of, problematically, call it in Britain. Tickets are €16 for a kind of all-you-can-watch performance buffet. Last night (Friday), that meant in theory one could have started at 6pm and carried on seeing things until an after-show party kicking off at 12.30am. There was even a shuttle-bus service running the couple of miles between the two theatres so you could whizz back and forth between shows, although I opted to do one night at Sophiensæle and aim to sample the HAU menu another night (or not, as it turned out).

The festival’s curatorial policy is an odd one: apparently the first 100 groups who apply get to perform. That’s it. Although, judging by last night, there might be a bit of post-application selectivity on the part of the venues as to what time slot and perhaps space any given performance is allotted, but perhaps that’s unfair of me and it was mere chance that the stuff I saw just happened to get progressively more ambitious. 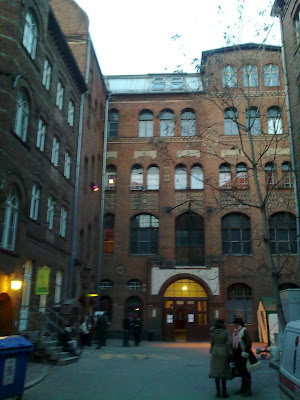 One reason I wanted to stay at Sophiensæle all night is that I wanted to see as many of its spaces as possible. I’d only visited once before, for a kind of promenade jukebox musical based on the music of Arnold Schoenberg (how could one refuse? I know. I must write that up sometime), and was keen to see what else it had. The building might have been some sort of old factory or perhaps, I dunno, ballrooms (?). It is set on a surprisingly quiet street, considering its immediate proximity to Hackescher Markt and has got something of the Arcola or BAC about it; although its peeling paintwork and cultivated atmosphere of faded grandeur is more reminiscent of the old Shunt Vaults or perhaps the original Underbelly in Edinburgh, with comparably enviable spaces. I admit I’m a sucker for peeling paintwork and crumbling plaster in Really Big Rooms, combined with ex-industrial spaces, in one instance even retro-fitted with a heavy iron circle/balcony. This is surely venue heaven. 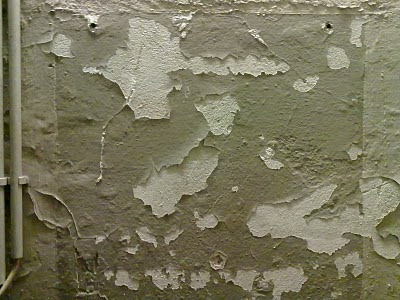 Anyway, I should talk about the work. The first thing I saw was: 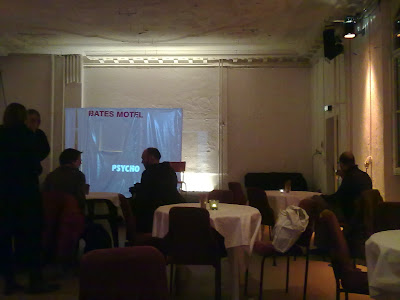 Lest anyone accuse me of only ever watching German performance through rose-tinted spectacles, let this piece serve as the ur-proof that it ain’t so. I have no idea at what stage Psych0 is supposed to be (like the BAC’s Scratch Festival, 100° Berlin also takes works-in-progress), but after fifteen long minutes, I didn’t much care and crept away. There are some pieces for which the best advice is just, “Stop, and maybe start something new”. Just so you know, Psych* is a one-woman show, for performer, small fake wall and large puppet. It also features a bit of (very basic) live-feed video (performer sits behind screen and leafs through an old family album of B&W photos while holding a video camera. Results are projected onto screen. etc.).

Mostly, it features the one-women talking to herself (or, I suppose, to us – the audience – although I’ve rarely felt less addressed), in character either as Norman Bates, or as Norman Bates doing his mother, or as the actual mother. It wasn’t terribly clear whether the puppet was standing in for the actual, living mother, or a younger version of the mother’s famous corpse. At other points it was like a clown-show being performed behind the fourth wall. Either way, douple-plus ungood. 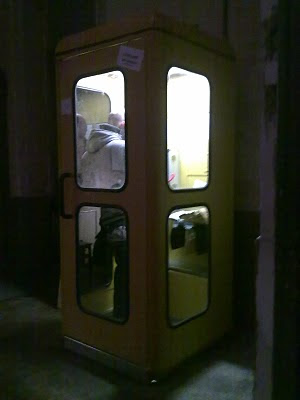 Given the longer-than-expected break between shows occasioned by the above, I was grateful that as well as sit-down performances, there were also a few installations dotted about the place. White Horse’s Loveline – which has apparently been doing the rounds of this sort of event, maybe a bit like Rotozazza’s increasingly ubiquitous Etiquette – was handily located in the bar. It’s a brilliantly simple, self-contained thing. You go into a phone box, and pick up a receiver to hear the soundtrack to the film being shown in the bit where you used to dial from (with a choice of nine (?)).

The films show people making declarations of love into their mobile phones in various locations. The one I watched seemed to be quite a saucy declaration of love being made on the U-Bahn (yes, that works here. The underground is really shallow so mobiles have full coverage). Oddly, the most compelling aspect of this little film is the reactions of the two young men sitting next to the – presumably – actress making the “call”. They’re at once in on the joke – the person filming the “phone call” will have been clearly visible to them. At the same time, they’re clearly also almost beside themselves with a mixture of embarrassment and, well, finding it sexy.

There are a lot of the yellow ones of these, and this...