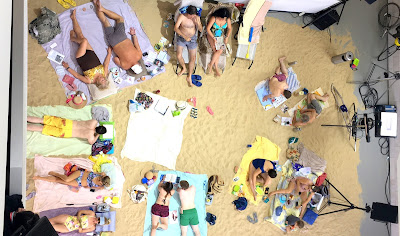 Sun and Sea is a contemporary opera made by Rugilė Barzdžiukaitė, Vaiva Grainytė and Lina Lapelytė. This presentation at the Sirenos festival is in its “installation” form, at Lithuania’s National Gallery. To this end, the piece is played at the bottom of a wide stairwell, and we – the audience – watch leaning over three floors of bannisters, looking down on it, with the surtitles projected (in white, on white) onto the staircase. Initially it is visually arresting, but we’re soon let off with a caution.

The form of the piece is essentially a kind of psychic seagull’s view into the minds of various sunbathers on a foreign beach: we hear their (sung) frustrations, petty grievances, and trivial satisfactions, set to an undulating electronic ambient score (played live? Who knows with electronic music?). Some of the bits are more interesting (both musically and emotionally) than others. There’s a bass whose Nietzsche-for-Businessmen approach to life is clearly driving him into an early grave, and a mezzo soprano whose bitching about other people leaving rubbish on the beach is a real musical pleasure.

On one hand, this set-up feels incredibly modern, and perhaps even a teeny bit iconoclastic, but it’s basically Lithuania’s answer to London Road, without the narrative drive. And, while I’m all for ironic postdramatic detachment, if there aren’t going to be chairs, then I reckon we might still need a more compelling reason to stay standing than *some musings*.

As it was, you could hear the music round the entire gallery, so I *might* have wandered off and looked at the paintings for the last half hour.