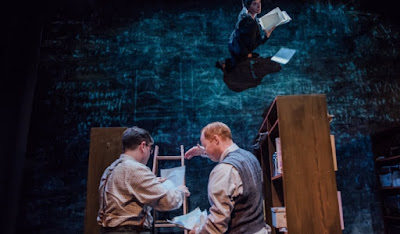 I’ll start with my only real grumble: “[Sapiens, by Yuval Noah Harari,] being a non-fiction book, with no characters or plot... the creative team and ensemble...” made some up. I mean, Secret Life of Humans is a pretty good play, very much in the Complicité (circa Mnemonic and Disappearing Number) mode of “how to devise a play about a big subject around a smaller human story.” My grumble is just the implication that it’s impossible to do it differently. I absolutely don’t mind that this was the choice taken, I just wish people would recognise and admit that there were/are choices.

So, yeah. Secret Life of Humans – written by David Byrne, directed by David Byrne and Kate Stanley, devised by the company (no, I’ve no idea how that works/what that really means, but that’s fine) – is basically a Complicité show of a Richard Curtis film. On stage. About the origin of the species. Or: it’s essentially a detective story about what Jacob “The Ascent of Man” Bronowski did in WWII [spoiler: he essentially devised the mathematical formula that made the firebombing of Dresden and Hamburg so horrifyingly effective]. In it, his grandson, Jamie (made up?), meets up with Ava, a researcher in the same field, on the world’s most coincidental Tinder date (definitely made up, right?). He takes her back to his (dead) folk’s place, for a one-night-stand, and a quick look into his grandfather’s locked and alarmed room in which he keeps all his secret papers related to this source of great personal horror and anxiety. Suddenly, the patrician BBC documentary-maker with an inaccurately upbeat prognosis for human progress is a lot more complicated. We see episodes from his life in flashback, intercut with his grandson’s coming to terms with what it all means, and talking about the big theories of evolution, etc.

What’s fascinating, watching Secret Life... for all its undoubted theatrical achievements (for a Fringe show, it really does have a couple of remarkable special effects, as well as a decent set and excellent video projections, etc.) is the extent to which it also seems hell bent on coming up with an optimistic ending. I have to say, I found that about as convincing as Bronowski’s “Ascent” thesis. Much more interesting is the pessimistic underbelly: that Homo Sapiens started life as an uncontrollably vicious, genocidal species – apparently the world is littered with the mass graves of Neanderthals, our nearest biological cousins, suggesting that the human race systematically slaughtered every last one of them to achieve our current position of global superiority.

Standing, as we now do, on the brink of certain environmental catastrophe, accompanied by a likely succession of international and civil wars, fought along every conceivable division imaginable (east against west, white against black, Islam against Christianity, men against women, etc. etc. etc.), it’s pretty difficult to get excited about any possibility of the human race’s survival. Or, really, why anyone would want it to. Sure, there are some nice people, but there’ll probably be some really lovely talking cockroaches soon enough.

Conclusion: if you want people to care about your characters, don’t remind us that they’re human, much less what “human” really means.