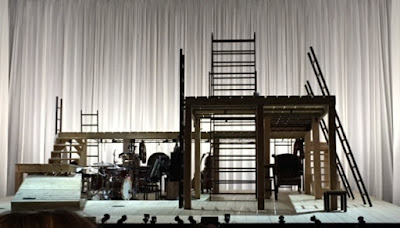 “To see two excruciating Brontë adaptations in a week looks like carelessness...”

But Sally Cookson’s Bristol Old Vic/National Theatre touring production comes with promises that it’s good from everyone from Matt Trueman to Quentin Letts.

Suffice it to say, I disagree with the former. I already knew I disagreed with the latter. I should have stuck with my instinct: if it’s alright for Quentin Letts, anyone else who also likes it has made a category error.

Worse than that, though, is the strikingly Brexity tone of the whole thing. It might as well be called Farage: The Musical. Or My Victorian Fountainhead, or something.

Sure, I’m being completely unreasonable, but since when was art about being “reasonable”? What happens in this Jane’s-eye-view adaptation is that she goes right through life being pious and insufferable, and no one much likes her – basically because she flatly refuses to shut up about how right she is the whole time – and then in the second half she’ll be rewarded with a misunderstood bloke who only locked his black wife up in the attic because she was mad. Aw.

Someone somewhere has probably also suggested it’s super-feminist. It isn’t. Unless the definition of feminism is: one woman is better than all the other women, and she should have all the nice things. All the other women in the play are mad or, worse, servants, and Jane hasn’t really got any time for them. She’s just a monomaniac with a Rochester fixation, and everyone else is bitches.

Very little of all this is the fault of the cast, who are quite good at standing, shouting, making “physical theatre” shapes, and providing the paint-by-numbers emotions that each short scene requires. Yes: this Jane Eyre has all the emotional impact of a Brecht play about some naughty robots.

Once again (as with Tenant of Wildfell Hall), it wouldn’t be difficult to suggest that the casting breakdown by race isn’t remotely progressive, and possibly even offers succour to bigots (black woman is mad, mixed-race woman is servants, hero and heroine are white).

No wonder Quentin Letts spent the whole thing gurgling with pleasure. It’s his worldview presented in a way that’s at pains to pretend it’s cutting-edge. (It’s not. It’s the set from the BBC Shakespeare Histories directed by Jonathan Miller in the 1970s, it’s the Berliner Ensemble from the 1950s, plus PERIOD COSTUME, FFS.)

Now, look, I’m a big old pluralist, ok? Sure, I wish the NT wouldn’t resource this sort of reactionary hogwash, but Rufus Norris’s fatal misunderstanding of his job is that he has to make every cunt in the country happy, rather than demonstrating any kind of progressive artistic leadership. So, basically, if The People like this old-fashioned crap, then who am I to tell them they’re wrong, and that it’s pure theatrical right-wing bubblegum wearing “radical” chic? (Maybe that’s what they wanted in the first place, and who am I to question the will of the people?) Who am I to recall that it’s basically no different to that godawful Shared Experience Jane Eyre that I saw in, like, 1999 or something. And, if someone makes basically the same adaptation 18 years later, there’s no semantic possibility that you can call the second one “new” or “experimental” or “cutting edge”. In fact, if anything, this one is even less “risky” and “bold” and et bloody cetera.

This production has all the appearances of “radicalism,” if “radicalism” is a design choice dating from the mid- last century, and then NOTHING ELSE AT ALL.

I am so endlessly disappointed by English theatre.

But, hell, whatever. I really don’t mind if some people liked it. I think I just resent the way the idea of it was sold to me by some colleagues who I thought knew better*.


/rant over, as they say in the internet.