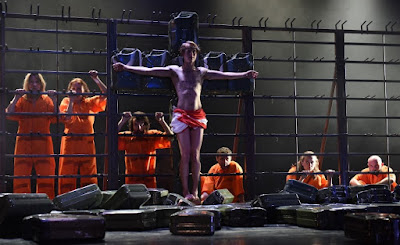 Is it too flippant to suggest that Oliver Frljić deliberately puts at least one scene in each of his shows that’s specifically designed to get him death threats?* In Our Violence, Your Violence – unrecognisably adapted from Peter Weiss’s 1975 novel of structural violence in pre-war Nazi Germany, The Aesthetics of Resistance – it’s probably the scene where Christ rapes the young Muslim women after removing her hijab that’ll do it.

Opening in Vienna last August, and going on to Berlin and Bydgoszcz before opening at “home” in Ljubjana, Our Violence, Your Violence is concerned with the ongoing European Refugee and Terrorism Crisis™. It starts with the cast introducing themselves – á la some well-meaning verbatim project seeking to understand the “crisis” – as various Muslims and refugees and 2nd or 3rd generation immigrants.

Now, I couldn’t swear that all the performers are telling us biographies that are not their own, or wholly made-up, or parodic amalgams, or what; but it would be my guess. I can imagine this satirical approach to well-meaning, earnest theatre going down like a lead duck in Britain.

Apparently, on the piece’s European tour, it has encountered different objections wherever it’s been. In the German-speaking countries, it was the postdramatic, politically-correct objection to depicting rape on stage that was the sticking point (I should say at this point, that it was an entirely stylised, symbolic and entirely metaphorical sequence. So much so, that I don’t *think* the UK representatives of this tendency would actually have minded in this specific instance); whereas in Poland it was the point where one of the performers – naked except for a hijab – pulled a small Polish flag out of her vagina. (Of course, Poland’s exception to the rape scene was that it was Jesus Christ doing it, not the rape itself.**)

In England, I can imagine that the main issue would be the lack of “authentic” performers. Or perhaps, the lack of performers who *look* authentic. It is worth pointing out, for the record, that Slovenia essentially doesn’t have those performers. Ethnic divisions in the former-Yugoslavia were not really conducted along the lines of skin colour. It is worth noting as well, that this piece is perhaps better viewed/understood as an attack on other pieces of European theatre trying to “confront the refugee crisis” than as anything addressing itself to the refugees or Islam itself.

The piece is perhaps more like a patch-work fantasia on the paranoid ravings of far-right politicians and the media. A comment much more on the hysteria surrounding the refugees – and on the repeated attempts to “give a voice to the voiceless” (invariably undertaken by the already vocal) – than on the people themselves. As such, the company is perfectly equipped to make this piece, and have certainly assembled a cast which looks like the society beyond the walls of Mladinsko.

Compared with Frljić’s best work – Damned Be The Traitor... and Klątwa – Our Violence... is less original and less precise. Or rather, Oliver Frljić is hardly the first theatremaker to turn his attention to Europe’s disgraceful, racist treatment of refugees, and the ridiculous theatre of security that was thrown up post-9/11, and has only intensified since. As such, there’s less scope to be strikingly original. Although I wonder if there’s also the fact that there’s less personally at stake for the director and his performers here.

But what of the title. I’ve talked plenty about “Our Violence” (identifying with it here on Western side of the equation), but what of the “Your Violence”? Is “Our” perhaps the actors and the oppressive structures of theatre, against the “Your” of the audience? Or – are “Your” the tiny handful of Islamist terrorists, whose attacks on Berlin, Brussels and Paris are commemorated here? There is a sequence where the cast – clothed in the inevitable orange Guantanamo fatigues – perform a series of beheadings until all but one person on stage is “dead” (which seemed to me to be an almost exact re-tread of the executions sequences in Damned...). There are also plenty of songs (as per other shows). Indeed, much of the methodology feels instantly recognisable from the Frljić playbook. But that’s not to play down its affects here.

I tell you what, I’ll just be honest: this is a treacherously difficult show to write about for an English-speaking audience. I really enjoyed watching it. And I quite enjoyed thinking about just how outraged some people might be if it ever played in England. I also remember thinking that it would be an absolute bastard to review for precisely the same reasons. (Partly, of course, because Anglophone “criticism” is – when you’ve enjoyed a show – essentially on some level a matter of gloried sales-pitch.)

Perhaps the most interesting cultural development of the last five or ten years in England is the complete reversal of classical “left” and “right” positions on “offence”. When I was growing up, it was invariably the right-wing that was offended by art. From Mary Whitehouse, through the Tory party, to the PMRC; offence and censorship were right-wing. Now, “the right” seems to have stolen the initiative. Look at Donald Trump’s Presidential campaign. The whole thing was fuelled by gleeful abandon, and liberal outrage. The more he provoked outrage, the more it fuelled his supporters. And as it is in American politics, so it is in British theatre. Right wingers, by and large, seem to have learned to shut up about feeling offended, and so the vast majority of calls for artistic censorship come from what used to be roughly identified as “the left”. It’s a wretched place for so-called “progressives” to have found themselves, cast as Bill Grundy to the far-right’s Sex Pistols (who, lest we forget, were also completely “irresponsible” and wore Swastika t-shirts just to annoy people). So, yes, I found this show massively refreshing, because it wasn’t a load of pious whinging. It was willing to offend all sorts of people, and it wasn’t right wing, or misogynist, or racist, or anti-Semitic, etc. etc. at all. Though doubtless it would get called all sorts of things if it ever played in England.

My favourite bit of the show, however, was the point – just after a (male) “Syrian refugee” has been orally raped with a decapitated pig’s snout, threatened with actual rape, and forcibly fed alcohol (don’t worry, it’s all just theatre) – is when “Christ” (again, don’t worry; it’s just an actor playing Jesus, wearing a crown of thorns and the Slovenian flag as a loin cloth; not the real Christ) is holding the body of this abused man, now also wearing a hijib, who recites in a falting voice, the letter of self-explanation by the Latvian theatre director Alvis Hermanis, in which he explains his racist belief that “not all refugees are terrorists, but all terrorists are refugees”.

Perhaps it’s just down to confirmation bias, but in Our Violence, Your Violence I see an impeccable argument against racism and Europe’s anti-refugee hysteria, but then, I also know the people involved a little, and know their politics, and know their other work, and know that it is on the side of left-decency and left-progress (i.e. “no decency without gross indecency”, and *actual progress*).

It’s interesting, despite – or perhaps because of – Brexit, I feel increasingly that I have much more fellow-feeling and shared attitudes with theatremakers here in Slovenia than those in my homeland who – in political terms, but also in aesthetics – seem to be being forced to fight a series of increasingly pointless Twitter-micro-storms against both the snowflake “left,” and the hard-right who coined that phrase.

Our Violence, Your Violence isn’t “perfect” in any particular sense of the word, but it’s probably the most robust, antagonistic, fighty bit of left-wing theatre I’ve seen in an age. And perhaps the first this year that hasn’t made me put my head in my hands at the idea of “the left”.

It also made me wish that Rufus Norris had had the wit to commission Frljić to make My Country Matters, or whatever that NT Brexit response was called.

**Poland’s reactionaries, obviously. Not all Poles.

Assistant to the director – Barbara Babačić