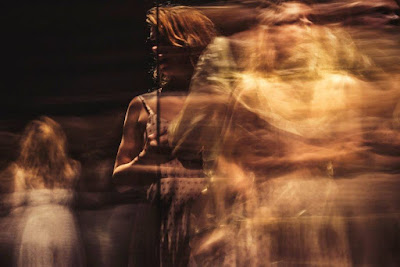 “1934 – Yerma, the second of the ‘Rural Trilogy’ is performed. The first performance is interrupted by right-wing groups. It is praised by the left for its honesty and modernity.”

These are the basic facts. (As offered by the YV Yerma programme)


It’s rarely the job of the critic to be conciliatory, but Simon Stone’s new production of Lorca’s Yerma, seems to necessitate it. This perhaps says more about the state of “critical thinking” on the English internet, than it does about the play. Despite knowing that the production had been near-universally hailed when it opened in August, I instinctively disliked it; but without any solid or meaningful critical reason. So the morning after I saw it I opened up “Did anyone else not really like Yerma?” as a bit of a discussion on Facebook and Twitter. There was an interesting split in the (mostly London) audience who’d seen it (or, in one case, boycotted it). The most vociferous argument centred around the play’s perceived feminism or misogyny. The Anti- side included noted feminist critics like Meg Vaughan, Maddy Costa, and CPT Executive Director Amber Massie-Blomfeld; while noted feminists like the Evening Standard’s Jessie Thompson, Soho Theatre’s Deidre O’Halloran and critic [don’t know which handle to credit review to] were very much Pro-. Essentially, either: a) the play “IT IS ABOUT A WOMAN WHO LOSES HER ACTUAL FUCKING MIND WHEN SHE CAN'T PERFORM THE APPARENTLY PERFECTLY ‘NATURAL’ PHYSICAL FUNCTION THAT A PATRIARCHAL SOCIETY EXPECTS OF HER.” Or: “Going balls to the wall with the most extreme reaction possible to infertility felt like a cathartic thing, something that women of lots of different ages and situations have talked to me about really connecting to.”

Annoyingly, I can completely see/hear/understand both points of view. (Doublethink or genius; you’ll have your own opinion, I’m sure.)

Beyond this, there was Jana Perkovic’s critique of writer/director Simon Stone’s previous Wild Duck, which certainly filled in some production back-story/context for me, and resonated with what I thought I’d seen at the Young Vic.

For Yerma, designer Lizzie Clachan has created a central traverse stage in the centre of the Young Vic’s adaptable space, and blocked off both sides of the audience from each other. The action takes place behind slightly mirrored/highly reflective glass walls. As such, we can see into these imaginary living-spaces inhabited by the couple, but can also see their reflections in the stage-wall farthest from us, and beyond that, either our own reflections, or the faint shapes of those watching in the banks opposite us.

It’s the sort of set that one could read any number of ways. You could love it, for its evocative critique of contemporary new-build, luxury-flat living (even though the characters have a brick house which has three floors and a garden), or you could decide that it’s just a rather hackneyed (no gentrified pun intended) rip-off of the sorts of sets that Ostermeier made his stock-in trade over a decade ago. Or maybe it’s a clever critique of those sets. I never really arrived at a conclusion. Into this set, Stone pours his very modern take on Yerma.

Yerma’s not a play I know, but it’s fascinating to try and imagine it, after seeing this production, as ever being part of a “rural trilogy”. This is obviously a play that’s been ripped so thoroughly out of its context, and apparently set in the modern world, that even reference to the original feels slightly futile. As Perkovic observes: “[Stone] has read and found these plays, and he would love to bring them to the general public, is how he often speaks in interviews and program notes. He will do what it takes to bring them closer to the average man, because he wants to convey the beauty of the classics. But Stone appears to understand these works primarily as stories...”

As such, Stone has taken something a bit like the plot of Yerma, updated the milieu, possibly improvised the dialogue, and plonked it before us in all its it-is-what-it-is-ness. There is fine acting of a certain type (close-up, radio-miked realism). Everyone has raved about Billy Piper’s performance as “Her” (Bechdel eye-roll). The performance does what’s required to make this version feel zippy and watchable, but I don’t know much about acting. Australian actor Brendan Cowell playing John is also pretty good, but bears an unfortunate resemblance to Stewart Lee that caused me to think “Oh, General Ratko Mladić has let himself go” (1.50) every time he came on stage. I’m sure a better briefed critic than I could compare the effect of a play “about fertility” set in a community that grows things *as work*, and a play about infertility set in a barren modern city, amongst a non-community of people who (you can practically feel Stone’s scorn here) “write blogs” and “do business”. In this production, infertility would seem to be the logical response to the environment.

Productions like this maybe function as a litmus test of confirmation bias, perhaps revealing to us what we actually want/expect out of theatre. Unfairly and irritably, I found the broadly naturalistic style, when matched with the entirely vapid, smug, over-wealthy central couple, somewhat grating. I know, I know; I should work on my humanity. It’s still sad when bad things happen, even to wankers. It shouldn’t be, as here: strangely satisfying. (Oddly, Piper’s character makes a similar point on her blog and gets crucified for saying as much. But let’s not get into Simon Stone’s silly ideas about “journalism” or there really would be blood.) Really, though, this felt like a bloodless, tame critique of almost exactly nothing. Maybe that’s the challenge? Maybe it’s about grading our ability to still empathise with the people who have destroyed London (the opening dialogue is such a grade-a example of people who are only-funny-to-themselves-obnoxious that the characters never really recover from it).

There was also the problem, for me (a person without a womb, or the slightest interest in children), that the thing relied an awful lot on our total complicity and empathy for its effect. Piper’s character says “I want a child” and proceeds to reiterate this claim throughout. We just have to believe that and then kind of identify with her? And then, as the pro- point at the beginning suggests, we then have to interpret the end as a kind of extremity-of-metaphor. Contrariwise, reading the whole play as either realistic or symbolic, we see either a woman or women being pathologised and then destroyed by a plot that is completely contrived and overwrought. It’s fascinating. I’d love to claim I had a definitive answer, but, like fuck am I going to try to explain who’s right about feminism to disagreeing groups of feminist women.

What I will say is that Stone’s text and production definitely aren’t my favourite sort of thing. Not because of gender (or even milieu, *really*), but because, to me, it felt endlessly glib and superficial (I mean, if you’re going to do milieu to the extent that it’s grating so hard it puts people off the play, the characters, and even off basic human empathy, at least get put in some effing *details* – what paper/website does Her even work for? for instance). And all this even while its central character is meant to be plumbing the very depths of her soul (albeit in a way that no one is really meant to believe as real? Is that right?). So, yeah: unnatural naturalism, literal symbolism, possibly rubbish feminism, but nice set and nice acting.

But, yeah, I’m basically stumped by the popularity.

Once again we are treated to something that looks like a theatre review but isn't. Hadyon actually admits this time that he knows nothing about acting (or directing probably either). Steeped in the tradition of the Left, he merely tells us how the play at hand fares in agreeing with his politics or irritating it. This sort of thing has been going on since the 1960's. It is self-referential and utterly decadent and in effect treats us to "journalism" which is all about the "journalist" and not at all about the thing he is purportedly writing about. It is pure USSR, Politburo-speak where works of art were submitted to the communist censors for approval. The works were judged as to how they supported or contradicted the State's chosen ideological universe. This is all Haydon does. Just by writing in the once free West, he is continuing the approach to the arts that was normal in Stalin's Russia. Haydon's style is of course not dour Soviet-style stuff but the agenda and purpose is amazingly the same. Does the work conform to the political Left's ideals? One can read thousands of so-called theatre "reviews" since the 1960's which only view the film or play in political terms and according to Leftist needs. This is healthy? Uh .. no. It's not even journalism. It's a form of advocacy disguised as artistic critical thinking. Our universities in both the UK and USA (and other countries in the West) since being taken over by the Left have produced this mindset quite deliberately of course in its students. Decades ago to read a review in "Time Out" or "City Limits" was to be reading merely Leftist tracts. I remember one such piece attacking a Disney animated film (101 Dalmations) as not being Marxist enough. These Leftist kids (later presumably adults) go on to hone their political-speak skills but are essentially nuts. Reading this stuff is like trying to have a sane, intimate conversation with someone who is running for office whenever they open their mouth. Haydon is treating us to what a clever, "hip" Politburo committee member would sound like if he was reviewing submitted work for State (i.e. Leftist approval). People on the political Right seem to be able to enjoy a cartoon or a play on its own terms pretty much without submitted everything to a personal, political litmus test. To do so serves to undermine artistic freedom and eventually art itself.