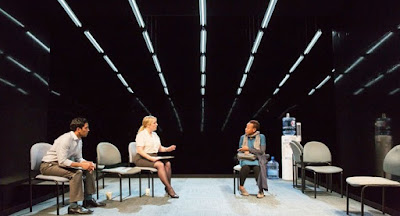 debbie tucker green’s hang is a staggeringly good piece of writing; crisply, beautifully, stylishly directed (also dtg) and designed (Jon Bausor), and acted with precision, force and lyricism by Claire Rushbrook (One), Shane Zaza (Two) and Marianne Jean-Baptiste (Three). (Christopher Shutt’s sound design (+ Luke Sutherland, composer), and Tim Mitchell’s lighting, in tandem with the design are both so subtle as to barely register, and yet also urgently present). The whole is excellent, and only 1hr10. Please go and see it if you get the chance.

I am now going to talk about what it’s about and what happens in it, and why those things made it great. I didn’t know any of this going in. So if you want that experience, then all I knew was that hang is about a decision relating to capital punishment. And immediately suspected that “hang” was a single entendre.

[everything else after pic] 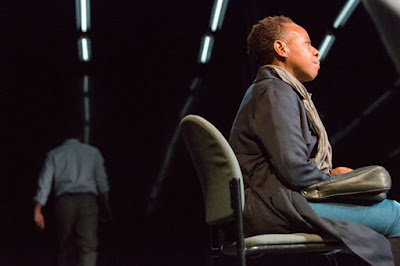 The first thing that strikes you about hang, after the immediate impression made by Bausor’s black, almost sculpural set – a gently raked, beige-carpeted square room, with institutional chairs and a water cooler, strip-lights hanging through a black ceiling, reflected on every surface creating the impression of the hi-rise city outside – the first thing that strikes you is the precision of the language. It’s both “beautifully observed” and somehow non-naturalistic. One and Two are clearly functionaries of some sort. They speak in tactful platitudes and barely ever finish a sentence. They cut themselves off. They trail off into silence. They self censor to avoid giving offence, ineptly. Rushbrook (female, middle-aged and white) and Zaza (young, male and Asian) [yes, race, age and gender are important here, although the script’s casting breakdown only stipulates “Character One (female) and Two (male or female) are of any race. Character Three (female) is Black.”] both play the lines with a sort of panicked intensity. They *could* be eased over, perhaps; made comfortable and workaday; but here the precision of the phrasing is highlighted by the starkness of the delivery. This is a sharp contrast with Jean-Baptiste’s colloquial, articulate, and often furious delivery. It’s almost as if everything else, the set, One and Two’s costumes, their way of speaking, the *carpet*, everything else focuses attention onto this one real thing happening in the room. Everything from her passion to what she’s saying is different. Here, instead of institution-speak, an attempt at verbal lift-music, is rough, sweary poetry, almost. Sometimes actually. There is rhythm, internal rhyme, metre. And Jean-Baptiste absolutely lives it. This is some fucking acting here. The whole cast are pretty bloody astounding, tbh, but it’s Jean-Baptiste who carries almost the whole of the emotional through-line. And you can’t stop watching. Although, when she does shift your focus back onto one of the other performers, they’re absolutely equal to it.

The situation here *feels* like a slow reveal. After all, the three characters in the room all know what the situation is. And we don’t. (Unless we read too many reviews or blurb beforehand. But I didn’t.) So we’re almost agonisingly waiting to be told what the discussion is about. But we know it’s bad. We can see the Three is distressed,or resolute, angry *and* calm all at once. And we can see that One and Two are reluctant, and terse, and maybe a bit embarrassed. They’re like teachers (the bad ones). They’re all regret and rule-enforcement, and also hamstrung by what they’re even allowed to do or say.

And the situation that is to be revealed (and yes, I’m about to reveal it here), is that Three has to choose the manner of someone’s death. Someone who broke into her house and committed numerous crimes against her and her family. No murder is specified, but we could imagine one. Her husband is spoken of as having been mutilated (? now can’t find in text), and something has happened to her too. We might guess that she has been raped. In front of her children, perhaps. Her two children are deeply traumatised, she tells One and Two. We know the man who did this is white (or at least had “blue blue eyes”).

Perhaps the most brilliant thing here is both the specificity – the language, the observations, the how-people-talk-ness and how-people-behave-ness, the sheer shoddy recognisable Englishness of the whole sorry business – and the total unfamiliarity which prevents us from already having a moral judgement. Is it about somewhere else? America? The near future? Was this “home invasion” racially motivated? We imagine the world outside the room as well. We imagine, perhaps, how much we wouldn’t want the Tories to bring back “capital punishment”, and yet recognise in ourselves, I think, something that absolutely wants Three to cause this man who attacked her and her family as much pain and suffering as he caused her. And, hell, yes, we’re rooting for her not to go back on her decision to see him hang, aren’t we? So much so, in the wake of *another* racially motivated shooting in America, that we’ve maybe left our “liberalism” quite a long way behind by the end. And, because the play stays true to its imaginative universe, we don’t have *that speech*, the usually embarrassing one you get in some plays, where the whole set up of the world-of-the-play is explained in painstaking detail by one character who knows to another, who also knows.

As a result, this is at once perhaps the perfect “State of the Nation” play and an uncomfortable exercise in confirmation bias. Doubtless some wag at the Spectator or Daily Mail will pop along to the play, and steeped in their pre-set loathing for the “left wing values” of the Royal Court (portraying black people with dignity, allowing women to write plays, I dunno, whatever it is those backwards bastards don’t like) will proclaim this play “leftie”. But actually, I’m not sure it is. I’m not at all sure it’s anywhere near as clear-cut as that. As I say, in the moment it comes damn close to convincing you that you’d quite like some capital punishment being meted out in the UK. That maybe we’d rather welcome the members of Britain First being put up against a wall and shot (Sorry chaps, but even by your own logic we’re hardly going to come First with you around). And, what else, really, does it say? It’s an elusive struggle between “justice” and mercy. And the discomforting vision that *neither* option will now achieve anything positive.

For me (definite confirmation bias no doubt), the play’s main achievement – beyond 70 of the most thrilling minutes of theatre currently playing in London – is refreshing our understanding that in a society as unequal as ours even attempts at justice just end up as further abuse. In a society that breeds both the criminals and the victims of crime, as surely as it breeds the carefree shoppers in Sloane Square, then it’s this society itself that needs to be taken out and hanged.