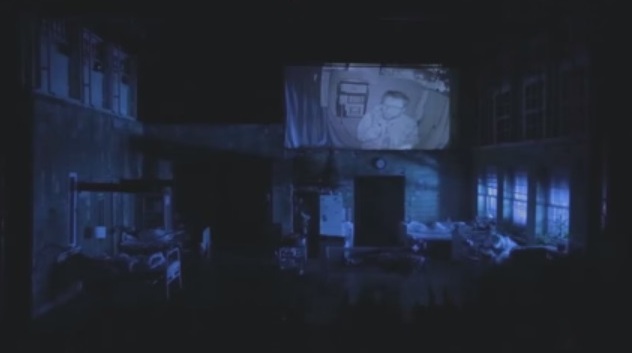 You know how even short-haul flights slightly warp your sense of reality? Then please forgive this necessarily unsuccessful attempt to get to grips with Proton Theatre’s Dementia. I rather suspect that I’d have found it deeply strange, even if it had played a five minute walk from the doorstep of somewhere I’d been happily settled for a month. As it was, I came to it approximately half an hour after stepping off my delayed flight from London Luton after a particularly nerve-jangling rush to the airport, and didn’t stand a chance.

The set-up of Dementia is simple enough. We enter the auditorium from round the back, so we have to access the seating by crossing the stage – through the detailed, naturalistic set depicting a run-down psychiatric hospital, reduced now to four beds, filthy tiles, and a grubby upstairs shower room and toilet. We are addressed with manic energy by the clinic’s only remaining doctor – sweating under the stage lights, shaved head shining. The four patients suffering from dementia, sit rocking and cowed; not all of them even elderly yet. Our doctor/prologue explains that he has discovered that music helps them reconnect with their memories. One has a guitar, the others electronic keyboards. One patient even has an iPad with the percussion from Garage Band open... They play the Vienna Blood Waltz by Johann Strauss II, with a new vocal part added. In the midst of all this mad festivity the pieces villain turns up and reveals that he has bought the building and the doctor and all his patients have to leave.

It’s all so compressed that it feels weirdly like a school play crossed with one of those genre pastiches that American TV comedy now does so well. After all, the “save our institution” narrative is hardly new, but this one feels like it’s being rushed through in a way that owes more to exuberance than rigour or deliberation. All of which is totally fine, of course. It’s just a little difficult to get a handle on what the intended tone or purpose is. Which feels like the most English anxiety imaginable. Watching this, you do suddenly realise, that we Brits really do like our genres firmly delineated. Even strokes of genius like Pomona or This is How You Die are really firmly anchored within the bounds of the familiar. Indeed, can’t remember the last time I saw something in Britain which made me think “What sort of thing even is this?”. Here, from about fifteen minutes in, that’s pretty much my only question.

There is something quite joyous about something so lurching and uneven. Are we meant to take seriously or watch as a farce? One minute it’s all lightness and fun, the next moment, it might well be a searing critique of Hungary’s treatment of the mentally ill. One moment it’s all cartoonish, innocent larking about, the next minute a naked actress is taking a shower and offering the villainous capitalist a blow-job on the loo. Then she’s inspecting his cock and suggesting that he has absorbed a living twin in the womb, whose fingernails and hair are still growing inside him. Later, the capitalist has his tongue cut out by one of the psychiatric patients. And then has it sewn back in again. While the band play another jolly song. All played with a sense of reality veering wildly between horrifying naturalism and total cartoon. You see what I mean about unevenness?

On the subject of the nudity, and much else, I did wonder if the piece would pass muster in Britain’s more hyper-aware, newly re-feminism-ed theatrical environs, but then I don’t get to much of the sexist end of English theatre, where maybe not an eyelash would be batted. In theory, the nudity count is pretty even handed: one full frontal nudity male, one female, then a bloke with his cock out, and two topless women (all of the “normal human being” variety (rather than everyone looking like they were picked to be in the show because they were going to get naked) and – bizarrely, given that one situation *is* sexual – the nudity is entirely natural rather than pornographic). Nevertheless, it does feel like a piece where the women are largely secondary, and really it’s the blokes – the doctor, the capitalist – whose concerns (which seems like much too large a word for what’s going on onstage) are paid most attention, or at least whose desires seem to be the motor for the piece.

So, yeah. Weird, weird piece of the theatre. It could well be an incredibly profound metaphor for the Hungarian situation at large – there certainly seemed to be satirical, barbed references which got a lot of local laughter, but further nonplussed stares from the international visitors in the audience. And apparently the piece is indeed inspired by an analogous situation which took place in Budapest, where a “modern-day Lopakin” bought up a building that housed mentally ill patients in order to turn it into a kind of battery farm for web-cam pornography.

The piece ends with the interior being folded up into an exterior view of the building, onto which is projected a Blair Witch-alike live feed of the denouement, in which the capitalist is essentially orally raping one of the patients with a banana and is shot by the nurse, after which the patients and staff all exit onto the street, sing ‘We’ll Meet Again’ and then suffocate themselves with plastic bags.

If I were Michael Billington I’d doubtless diagnose “the problems of the devised piece” and prescribe a visit to Peter Nichols’s The National Health, as if to demonstrate that a similar feeling of sexism can be achieved by one man and a typewriter. As it is, I suppose my unshakable, default English instrumentalism would suggest that if the company wanted this to be *useful*, they might need a bit more heavy-handed signposting for international audiences, and that they could happily lose about 30 minutes off the 115 minute running time without seriously compromising their integrity. But as I say, I was knackered and borderline hallucinating by the end, so I might not have been in any fit state to pass judgement. 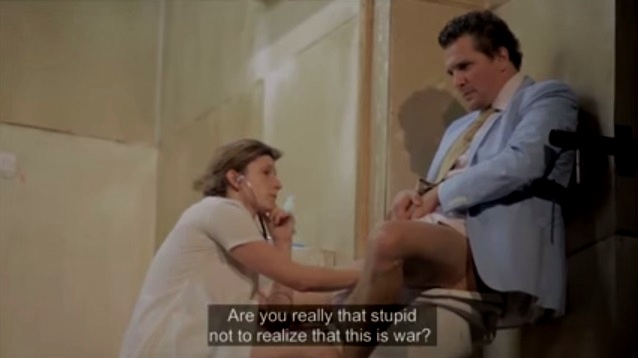