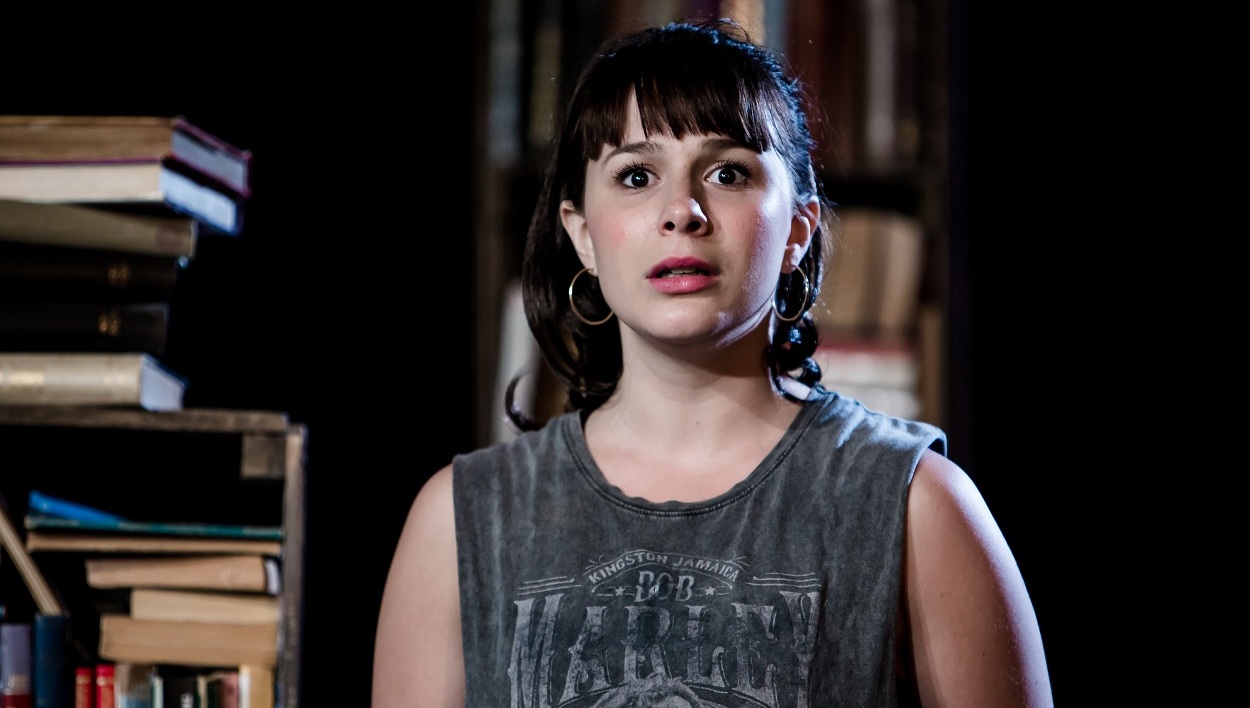 Rosie Wyatt is a properly, properly brilliant actor. And that’s a real problem. Because, well, great acting presents the same problem for theatre criticism as the Bad Sex Award bear testament to in literature. That is to say, great acting is bloody hard to write about well. We all know what it’s like, and we know when we’ve just experienced it, but actually putting those feelings into words is nigh-on impossible, and also risks reaching for the risible in the process.

One could dwell on the technical. In Spine, Wyatt plays an old lady, Glenda, in her eighties(?) or more, and a young woman, Amy, who’s only a year or so out of school, both have brilliantly observed working class London accents: the old woman’s of a vintage that reminds you of Carry On films and Ealing Comedies, the young woman’s that new post-cockney sound that seems to mix the accents of every immigrant community in London into something as recognisable as it is unplaceable. Both accents are flawlessly observed, and delivered with such machine-gun intensity, that you’re almost pinned to your cliché for the first ten minutes, hardly breathing under the torrent of wide-eyed, swear-heavy, enthusiasm and cursing.

Indeed, Wyatt is so good a bloody actor, that you find yourself completely forgetting how theatre works, and writing the first three paragraphs of your review of A New Play about the performer, because the performance is so good that you’re made to forget that all the words were in fact written down in a script (Clara Brennan), and that there is a director (Bethany Pitts), a designer, a lighting designer (neither credited in press release), who were also involved. Which is breaking pretty much every unwritten rule of theatre criticism that there is. It also feels weirdly like that’s because this is a production that’s broken the rules of theatre a bit. Ordinarily, when you see a new play performed in Britain – and this production has only just made me realise the extent to which this feels true – while the productions nominally “serve the text”, what that partially means is that the actors take something of a back seat? Like, one sense in which they’re “serving the text” is like “serving it up” or “serving it *to* you”. Like they’re saying the words in as ego-less a way as possible so literally nothing is getting in between you and The Writing. So you can appreciate The Writing, in as “pure” a fashion as possible. Wyatt isn’t doing that. She’s doing something that feels almost completely opposite to it. Without in any way feeling like a selfish act of diva-y attention-seeking (because it’s not, it’s the characters that feel terrifyingly present, and yet still totally “theatrical”, not the performer), Wyatt is like a sort of non-stop barrage of language, fury and passion.

But. It’s important to stop and acknowledge that this is a piece that’s been written. Because the writing is actually extraordinary. Spine – I’ll keep the synopsis brief – narrates in a rush the story of Amy turning up on the steps of Glenda’s house, looking for a cheap room in this austerity wreck of a country of ours, and, over the course of the next hour, being transfigured from angry aimless “pikey” (her words), into... oh, go and see it yourself. There’s even a bit of magic-realism in there. And, Christ, the thing contains at least half a dozen moments that run the risk of tipping even the most jaded hack into an embarrassing amount of weeping (for the record, I didn’t. Mostly because I was sitting next to Lyn Gardner, and I didn’t want to alarm her. I quite wish there was a video version that I could watch with a couple of glasses of wine when this sodding festival is over and get it all out of my system properly).

And. Not only does this thing contain the single most extraordinary performance in anything that you’re going to see all year – at least, equally tied with Mark Strong in ...Bridge (yes. It really is *that* level of good, ladies and gents) – and some of the most virtuosic writing (yup. Really), it’s also got a narrative and drive that are actually about something that properly matters. And, rather than the (admittedly brilliant) reflections of the despair and darkness that we’ve living through that are playing elsewhere on the Fringe, it angrily offers a vision of potential for change, not to mention some neat observations (“what you need is a feminist man who thinks you’re the funniest person alive” (I paraphrase)) and the best slogan to represent feminist refusal and determination ever (“Less twat, more cunt”). I’m tempted – even if only for the sake of having some, *any*, reservation in this rush of enthusiasm – to say that it’s a worry when the best form for talking about socialism is as a ghost story. That’s a crude way of putting it, and Spine isn’t *really* “a ghost story”, but there is a sense that just as it’s at its most hopeful, it’s also at its most fairy-tale. That the promise and possibility of hope and change are its most fantastical element. But maybe that’s just my personal pessimism, and complete lack of faith in humanity to ever stop actually being shit to each other. And my ongoing mistrust of revolution as a means of delivering anything, really, more than violence and ongoing slaughter. And, assuming those are things that we also want to avoid, along with the entrenched violence of capitalism against the proletariat, the hell we do about that is still hard to say, even if Spine does make the most beautiful (if impossibly optimistic) case for people becoming the change they need on an individual basis, and transforming their communities from the molecular level upwards.

But. Fuck it, you *must* go and see this. And probably let yourself have a bit of a cry. And be moved by the possibility of human potential. And the idea that maybe we can change things for the better. And that maybe libraries can end oppression. And then wrestle with the fact that even in this brilliant, beautiful play, we’re still so fucked that the most optimistic play about the possibility of social change that I’ve seen on the Fringe so far has a conclusion that rests on a social revolution effected by private philanthropy and London’s obscenely inflated property prices. And trying to work out whether, if those are the terms by which social change can happen, it’s even going to be a social change at all. (Ultra-pessimists among you might also note that the venue complex making even seeing this possible is the profit-machine of two Old Etonians a couple of years below David Cameron at school.) But, yeah. Still brilliant. Still inspiring, and still one of the performances of the year, a stunning bit of new writing, and direction so tight and assured that you can’t even imagine the process. And/but something that bitter-sweetly leaves you wanting so much more from the rest of the world.
Posted by Andrew Haydon at 15:16