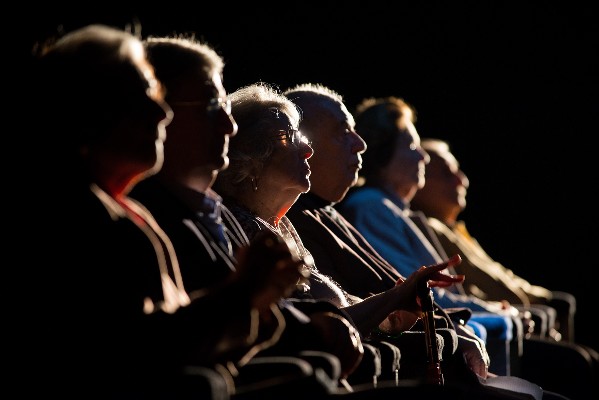 Die Letzten Zeugen (The Last Witness) is a verbatim piece from Vienna's Burgtheater about Holocaust survivors, made by its recently disgraced artistic director Matthias Hartmann and Doron Rabinovici. What marks it out from many other such pieces is the fact that sitting on stage are seven survivors of the Holocaust.

On one level, this puts the piece “beyond criticism”.  At every other level, however, it intensifies the need for scrutiny. It is not enough to put some survivors of the Holocaust on a stage and to call it theatre. Indeed, it feels incredibly suspect to do so. Of course, that's not what Hartmann and Rabinovici have done, so it's worth describing in detail what is present.

The stage is hung with two large cinema screen-style gauzes. One large one toward the front of the stage, and a smaller one toward the rear. In between these two gauzes a woman (periodically) sits at a table writing on an endless sheet of paper that runs left to right across the whole stage. Occasionally a live-feed video camera trained on the paper shows us what she is writing projected on the fore-screen.

At the very back of the stage, behind the second gauze, are eight chairs in which the seven remaining Holocaust survivors are seated. One chair is now empty, marking the fact that one of the original cast has died since the production began last year.

How the piece works is that the actors take it in turns to stand at the lecturn and read the intercut testimonies of the survivors, while a(nother) live feed video camera scrutinizes the present-day face of the person whose testimony, with the sharply lit result projected, in black and white, onto the rear gauze screen. On the fore-screen an assemblage of personal and stock archive photos show scenes of pre-Anschluss Austria, Nazi soldiers on the streets, and later the familiar “Arbeit Macht Frei” signs and striped uniforms of the concentration camps.

In this, it is a staggeringly muted production. Of course, in the abstract “muted” sounds like it might be (could be, should be?) the only possible register. What need is there for flashy stage effects or emoting? Except, there are those effects – two screens worth of live-feed, the woman at the desk, even the foregrounded pretence of the actors “reading” the testimonies. All these are effects designed specifically to signify everything from the unimpeachable truths on show, to the degree of reverence for them required. It's no accident, perhaps, that the lectern recalls a pulpit. On the other hand, given the subject matter, it also feels inappropriate.

For my money, there kept on being these strange, small semiotic misfires. Like the fact that the survivors were seated at the very back of the stage. Like the fact their faces were painstakingly scrutinised in extreme close-up by an unblinking camera. Like the fact that their words had been wholly appropriated and were being spoken by Austrian actors. One of whom especially – Peter Knaack (last seen by me playing Peter Handke in Katie Mitchell's Wunschloses Unglück) – happened to be tall, broad-shouldered, and chisel-jawed: handsome, with his fair hair side-parted and short at the back and sides. You see what I'm driving at here? You see why it maybe felt a little problematic?

Of course, disconcerting Aryanism notwithstanding, the main reason for this was expediency. The six remaining survivors are aged between 80 and 100, and are now mostly frail. It would be impractical – impossible even – for them to each deliver their entire testimony live every time the piece played.

In the latter half of the piece, one by one, the survivors come to the centre-stage lectern and deliver some words themselves. A personal reflection on the here and now, and a message to the future. They are then led off by one of the actors. Even this has the unfortunate effect that everyone Jewish on stage being removed, one-by-one, by someone Austrian.

Appalling as it sounds, I felt left quite cold by the production. I'm sure it's partly cultural, but the delivery to me just seemed almost impossibly matter-of-fact. The stage-craft far too staid, and uninspiring of anything at all. And the placement of the Holocaust survivors felt suspect and troubling.

But then, there's also the question of context. No matter how many pompous pieces I write for the Guardian about trying to go out of our way to understand other national traditions better, the one thing I was never going to be in that theatre on Wednesday night was German or Austrian. There is a shared history, an inheritance, which I will never really be able to experience. I can sit there, British and comparatively guilt-free, and cavil about dramaturgy and stage-craft, but I know what my grandparents were doing during WWII, and it wasn't this. That's the blunt end game here. This material, no matter how it's presented, had an astonishing effect on the majority of those present. I don't think I've ever seen a German audience give a standing ovation before. And this wasn't simply an act of approval or applause, it was about a profound gratitude for the gesture made by these survivors of unimaginable horror, that they would stand up in front of the children and grandchildren of their torturers and murderers and offer something that is ultimately a message of hopefulness, even as they observe that Austria is still riddled with anti-Semitism and citizens largely failing to take any responsibility for the country's part in the Holocaust.
Posted by Andrew Haydon at 12:36

i didn't see this but when i heard about it, i felt troubled - which is why i was interested to read your review. well done on managing to criticise the problems while still honouring the gift and bravery of the participants.