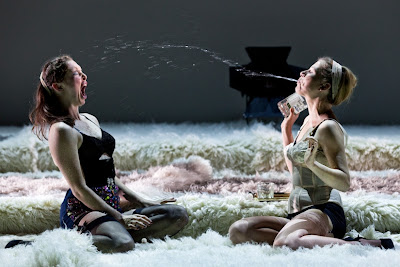 A confession: I’ve never actually gotten round to watching to Rainer Werner Fassbinder’s original film The Bitter Tears of Petra von Kant. I’ve had it on DVD for ages, but somehow it never feels like quite the right time. I did, however, see a very fine Swedish version at the Swedish Teaterbiennale in Borås in 2009. At the time, I remember finding it absolutely devastating. Hugo Hansén’s production was, kitsch design notwithstanding, played pretty straight. The actors seemed to take their emotional trajectories seriously. The other massive factor, was that I watched with a simultaneous translation being done live into my ear, via a headset. As such, alongside the stage-version, I also had all the meaning of the words speaking directly into my brain; like a disconnected internal monologue over which I had no control.  It somehow all combined to make it one of the most affecting things I'd seen for a long while.

Patrick Wengenroth’s production is less concerned with leaving us emotionally devastated as with having us observe the emotional devastation of the characters. In this respect, it’s easily as Brechtian a piece of theatre as the more grandstanding versions of V-Effekt seen at the Volksbühne.

It opens in front of Mascha Mazur’s nudge-nudge, wink-wink stage design – composed of numerous deep red openings, with frilly edges, forming a wide tunnel, you get the picture – with a wholly unexpected cover version of Lovecats by The Cure, performed live by Wengenroth and his musical director Matze Kloppe dressed in human-sized cat costumes. (So, ok, there were animal-head costumes, but unless you’re seriously going to try to argue that The Cure’s video for the song is some kind of year-zero of German theatre, then I don’t reckon it counts.)

Wengenroth then proceeds to whip off his cat-suit and is revealed to be wearing both a faintly silly see-thru blouse as Petra’s maid Marlene, and a Fassbinder-style moustache and hair-do – presumably as a postmodern nod to the presence of the auteur and creator of the story within the story itself. (I realise, writing this, that I’ve become way more inured to how strange German stagings are, in that I came out thinking this had been quite normal production.)

Jule Böwe and Lucy Wirth enter, as Petra and one of her friends, and proceed to frolic and set-up the story, lounging on the set’s white fur rug floors, draped over those ubiquitous downward steps, which someone once told me were a kind of standard for the staging of classical tragedies. The introduction of Karin, Petra’s fatal love-interest, also played by Wirth, is effected with a simple wig-change. And the two flutter and coo at one another. Karin performs a fine version of Beyoncé’s Ego, and there’s a sex scene which basically entails the two drinking water out of their glasses and them spitting it, fountain-like, into one anothers’ mouths.

The narrative proceeds in – as far as I can tell – exactly as it does in the film, perhaps stripped back slightly, and with more musical interludes.

It was hard in-the-moment to perceive a meta-reason for doing the piece, other than the sheer pleasure of doing it at all. But it’s none the worse for that. The company/director/dramaturg have created a coherent way of telling the story, and it does feel that, thanks to Fassbinder’s own politics, and this season’s Spielplan at the Schaubühne, it also fits into a wider conversation about how we live and love in modern life.

The title of the introduction to this year’s Spielzeit is: “Die Kapitalismus liebt die Stille nicht” (basically: Capitalism loves not the silent/silence), and it feels like that “liebt” isn’t a coincidental word-choice. Actually, it’s a really interesting piece – an interview between Schaubühne intendant Thomas Ostermeier, dramaturg Florian Borchmeyer and the philosopher and professor of cultural studies at the University of Arts, Berlin, Byung-Chul Han. What’s great about the interview, quite apart from just the sheer fact of its existence, is that they director and dramaturg are really just interviewing Han. They say a bit of stuff, but there’s a real sense that they’re hugely interested in his philosophical perspective. It’s perhaps also telling that Borchmeyer seems to ask more questions than Ostermeier.

Granted, neither have a direct production credit on Petra, but this exchange from the interview seems to roll the theme of unfulfilled desire in both love and capitalism together in a strangely pertinent way:


Florian Borchmeyer : Maybe it’s not just about greed, but about longing. Capitalism is a system that generates requests that were not previously available. It invents new needs and desires for new products that no one previously required.

Byung-Chul Han: Eva Illouz [of whom I’d never heard before, and whose work sounds fascinating] combines capitalism with the romance, with the consumerist romance. But I’m not sure how capitalism is romantic. Longing refers to the impossible, the unattainable. It is not consumable.

Which, possibly brings us back to that neat point that René Pollesch once made, that I first paraphrased here back in 2009: “I would like to talk to the capitalists about money, but they only want to tell love stories”. (And which Andy Field has now made into this piece for Paper Stages '12) Or rather we find that Ostermeier, being less of a Marxist than Pollesch, wants to use love stories to interrogate capitalism in his theatre. To use stories of destroyed longing to illustrate some much bigger crashed markets. I’m not sure I’m enough of the mindset that perceives such motifs in-the-moment, but it is fascinating to discover them after only the smallest bit of digging around.

It is perhaps a difference between British and German theatre that we Britons tend to want everything to turn up all at the same time, heavily flagged and signposted so we can “get” it all, all at once. And, perhaps to a German audience this is precisely what did happen here too. But, assuming not, I find it infinitely great that I can return to an evening I had almost two weeks ago now, and still find something new to marvel at even now. 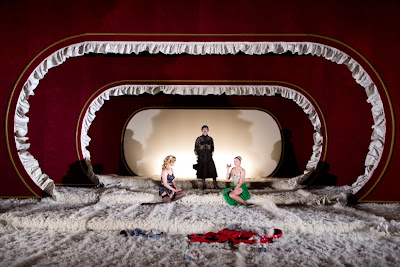 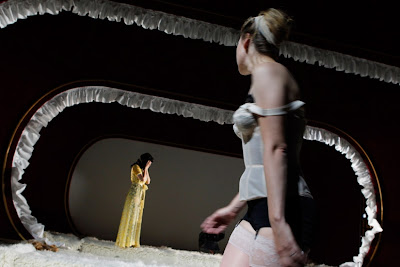 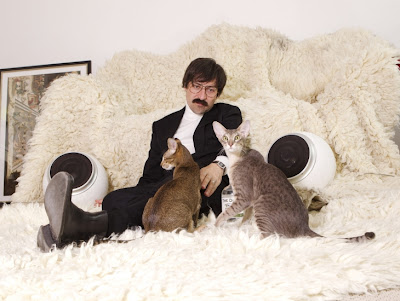