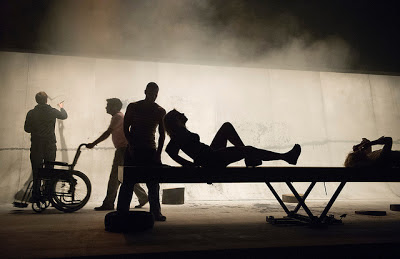 [In the spirit of full disclosure: I’ve known John Donnelly since his A Short Play About Sex and Death at Leeds Uni was the reason I first went to the National Student Drama Festival in 1997. And we’ve been mates ever since. And since that NSDF is pretty much the single reason I’m where I am today (in a pub writing a review. Thanks a bunch). The first thing I ever directed was a short play by John Donnelly (starring Lucy Ellinson. Yes, that Lucy Ellinson). And, on the night I saw this Seagull in Watford, the actor John Hopkins (currently rehearsing with the RSC), who’d starred in A Short Play About Sex and Death, was also there (which in itself says something about the loyalty of university theatre friends). And we all went for a drink after and I was introduced to director Blanche McIntyre and half the sodding cast. So, yeah. This is about as compromised a review as it’s possible to imagine.]

Further, coming to The Seagull roughly a week after its press night in Southampton seems to have been another error (see also: Narrative). The reviews have been pretty unavoidable on social media. And, well, there’s nothing like having your expectations managed, and this was nothing like having your expectations managed. From Matt Trueman’s five-star rave in his Torygraph début downwards, the only person who apparently didn’t love Headlong’s new Seagull was the Salisbury Journal’s Elizabeth Kemble (like “a bad school production, made by rebelling teenagers who wanted to shock their audience by sticking in a sex scene, a bit of nudity and littering the dialogue with the F word”). And even Kemble sagely concedes that these things are “always a matter of opinion”.

A couple of the reviews (notably Lyn’s and Matt’s, ironically) suggest that the crux of this production is a battle of youth versus age. For my money, it breaks down into a much more undeclared war between the sexes. In the staging of Konstantin’s play, it is predominantly the hostility of his mother, Arkadina, and the nerviness of his would-be actress, Nina, that derail the project. The kindly, elderly(-ish) doctor, Dorn, is actually rather encouraging. Where men fight – most obviously Konstantin and his mother’s lover, and his inamorata’s seducer, Trigorin – it is because of women. Obviously, as an essay in gender politics, this isn’t a super way of looking at it. Director McIntyre (and probably Chekhov) get around this by at least crediting the women with a respectable amount of agency of their own. These are not merely simpering playthings stuck into the play to facillitate the Big Important Feelings of some guys.

There are no winners in Chekhov. Only different sorts of loser. Here it doesn’t feel implausible to suggest that in Donnelly/McIntyre’s version the women do finish up ahead, if only on points. Abigail Cruttenden’s Irina and Pearl Chanda’s Nina are, by the end, slightly less broken than their respective lovers. Even Jenny Rainsford’s booze-soaked, bitter, pragmatic Masha with her solution: “It's what you do isn’t it when something makes you miserable? Find something else to make you even more miserable” somehow seems to come out on top of her situation, albeit in the worst way imaginable.

The men here, at least, the younger men, seem much more mad and neurotic. Alexander Cobb’s Konstantin is convincingly young, gauche and embarrassingly petulant. He’s not been glossed or smoothed into a tragic hero, instead, he’s horribly accurate as precisely the sort of precocious teenage nightmare we all wish we’d never been. It’s a pity he kills himself, since, in a few years he’d have probably have graduated to becoming the (also uncannily accurate) desperate mix of cynicism and fear displayed by Gyuri Sarossy’s Trigorin. Rather than playing him as a louche seducer, Trigorin here seems pretty much at the mercy not only of his career as a writer, but of his attachment to Arkadina and Nina’s subsequent attachment to him. Yes, he still behaves like an utter shit, but remarkably he comes off looking like a victim of circumstance – someone just a bit to immature to actually be relied on for anything by anyone ever. You don’t get the impression that this Trigorin is ever really enjoying himself any more than Konstantin isn’t. Or Nina isn’t. Or Arkadina isn’t. Indeed, if anything, this production makes a strong case for never aspiring to artistry of any sort whatsoever in your life. Or, at least, making damn sure you prefer labour and settling down with whomever is closest.

The most obvious touchstone for this production for other reviewers seems to have been Benedict Andrews’s revelatory Three Sisters seen at the Young Vic last year. It is also interesting to note, in passing, that no one as seen fit to compare it with Anya Reiss’s recent (largely unpopular) modernised Seagull set on the Isle of Man (snigger), seen late last year (though not by me) at the Southwark Playhouse.

For my money it unwittingly owed a good deal more to Dimiter Gottscheff’s Volksbühne Iwanow. Here, as with the Gottscheff, the staging is essentially played on a bare stage with a stark concrete wall at the back and a smoke machine. By sheer coincidence the back wall is also graffitied on during the progress of the play. Unlike Gottscheff’s production, the stage is not totally empty. McIntyre’s designer Laura Hopkins (who also designed Rupert Goold’s astonishing break-out (at least to me, having missed The Tempest) Faustus) has plonked a massive, rough wooden see-saw on the stage. It’s a glorious, bold gesture (which goes some way to mitigating the slightly odd – and presumably touring-practical – decision to have the concrete-looking back wall only a couple of metres high) and it works beautifully as a simple, adaptable piece of set. In act one it is a kind of jetty, in two a kind of almost not-really-real metaphorical see-saw, in three and four a simple table pointing first up- and down-stage and then finally left and right. Of course, niether McIntyre nor Donnelly have Gottscheff's stern contempt for the idea that we might be seduced by the bourgeois comfort of identifying with the characters, but this is not entirely a bad thing.  What the production lacks in Marxist rigour, it makes up for in excellent jokes and painfully acute characterisations.

The biggest difference that Donnelly has made to the script [at least: a) I think it’s a change, and b) I think it’s one made by Donnelly rather than McIntyre – at least in the first instance] is that there are moments of direct audience address. The first of these feels genuinely shocking. You are taken completely by surprise when a character from Chekhov speaks directly to you, a member of the audience. In its own way it’s probably the most iconoclastic gesture you can imagine someone making with a Chekhov play, what with all the Stanislavskian baggage that it’s accrued (certainly in Britain, anyway). That said, it does feel slightly like this playfulness could have been more extended into the way that the stage is treated the rest of the time. Granted, what with the big see-saw and the modern dress costumes, the production *does* go further with it, but I suppose I’d have been happy for it to have gone further still. [take out the words, replace with animal heads and proper nudity, etc.] But, yes, this works. This is a good, solid, intelligent, British take on how to do Chekhov in the 21st century. If it feels to me more like the start of an important process rather than its end-zone, then that probably say more about me than about the production. But this if this is the shape of things to come, then I very much look forward to what comes next, and to Elizabeth Kemble’s ongoing, deepening despair
Posted by Andrew Haydon at 16:25

Just seen this production in Derby and have to agree with Elizabeth Kemble. It was like an amateurish sixth-form production. I found the play boring and it was an effort to keep my eyes open. Too many monologues, no real engagement with the audience, not enough physicality. The production failed to bring out the comic element of Chekov's dialogue. Very disappointed after all the rave reviews.