The German town of Bochum lies roughly 55 minutes outside Köln if you take the high-speed ICE train. And what a strange little place it is. Low, mostly new-build buildings; it looks like the kind of places you wake up in if you fall asleep on a night bus home in London: a one horse town with an open stable door. And a very well-hidden theatre. Doubtless, if you know Bochum, or live there, the location of its theatre makes perfect logical sense. Even if you bothered to take a map with you, it might be relatively easy to find, but if you happen to only look at Googlemaps before leaving the house, then it’s harder than you’d think. But more than this, it’s a surprise to find that a) it has a theatre at all, and b) it’s hosting a production by the internationally acclaimed director Sebastian Nübling (première March, 2012).

I was also interested by the fact that the production was of early-modern English playwright Ben Jonson. Shakespeare’s contemporaries don’t seem to get done an awful lot in Germany. And there’s no especial reason why they should be; strip out the language and the direct sense of historical precedence and you’re left with some pretty odd plots and a lot of archaic knob-gags to translate, right? So I was intrigued to see what Nübling had found in this piece to make all the extra effort worthwhile.

Perhaps unfairly, I expect a rather a lot from Nübling. As we might have established now, I loved Three Kingdoms just a bit too much. And I was totally seduced by his production of Pornography, which I saw in Nitra. In between, however, I also saw Alpsegen at Deutsches Theater in Berlin, which I didn’t much go for. Although I also should add that that production also marks the only time I’d ever seen a German audience boo a playwright.

Anyway, my new theory on Nübling is that I’m going to love one, then be a bit meh about one, then love one, then meh, and so on. Either that, or it’s only his productions of Simon Stephens plays I really like. We shall see. I certainly don’t intend any kind of boycott any time soon. And I am being unfair. Because on lots of levels, this Volpone is pretty good. Just not half as good as either the photos or Three Kingdoms might have led me to hope. And the photos are good, aren’t they? (one at top, one a bottom.) Also a bit misleading.

The actual set for Volpone (bühne – Dominic Huber) is essentially a rough wooden staircase flanked by a kind of false-perspective set of receding proscenium arches painted to look like, what? Seventies wallpaper? It probably looks better from the centre of the auditorium about half way back. I was on the relatively extreme right near the front.

It’s not a *bad* set by any means, but nor is it especially inspiring. Apparently the rising flight of steps motif is common to *a lot* of German stagings of tragedy. This is perhaps a slightly steeper set of steps than those, but then Volpone isn’t a tragedy either, so perhaps there’s some sort of ironic concept going on here that I’m only on the periphery of understanding. Perhaps, thinking about it in connection to the costumes, there’s a bit of Ost/ex-Ost-knocking also going on – the costumes might have come straight from Goodbye Lenin, or perhaps just the seventies in general).

Then there’s the matter of the play. Now, obviously pretty much anyone who reads this blog probably knows about the attendant discussion about misogyny that followed Three Kingdoms. And those readers will also know that I put up a fairly strenuous defence of why I didn’t think it was misogynist. Which I think I’m still pretty happy to stand by. At the same time, it was impossible not to take what others were saying on board. I don’t know about anyone else, but I have a terrible habit of being able to carry on an argument believing in what I’m saying, even while the premise of what I’m arguing against somehow gets into my bones and my bloodstream and makes me think after the argument that it was me who was being unreasonable. I offer to as background to the mindset with which I went into Volpone.

Which is problematic, since Volpone isn’t exactly a play which treats its – relatively few – female characters well. Wikipedia dispassionately summarises their places in the plot thus: “Mosca mentions to Volpone that Corvino has a beautiful wife, Celia... Volpone insists that he must have Celia for his own. Mosca tells Corvino that Volpone requires to sleep with a young woman to help revive him. Corvino offers Celia in order to please Volpone... Volpone is left alone with Celia, and after failing to seduce her with promises of luxurious items and fantasies, attempts to rape her.”

“There are episodes involving the English travellers Sir and Lady Politick Would-Be. Lady Would-Be annoys Volpone with her ceaseless talking.”

Lady Would-Be has been cut.

So we’re left with the awkward proposition of just a beautiful wife and her attempted rape representing womankind for the 2-hour passage of this play. For what it’s worth, Celia is played by a perfectly normal-looking member of the ensemble and not an unreasonably pneumatic Estonian (one of the objections raised re: 3K). Yes, she’s dressed in some pretty high heels, but this is largely for comic effect. And she doesn’t seem to be picked on for especially poor treatment because she’s a woman. This is a cast made up to look like grotesques – one of Volpone’s retinue wears a body stocking under some skimpy Vegas-style outfit and a beard. Others include a skimpily clad overweight man and a kind of devil-clown-dog (really similar to the one in Oskaras Koršunovas’s Hamlet - it this a *thing*?). There’s also a rather pretty man dressed as a woman (I don’t know if in the play he’s a man-dressed-as-a-woman or a woman, like the Trickster in 3K he might not even be *in-the-world-of-the-play* at all) who sings a number of songs.

So, no, it doesn’t feel like it should be seen as sexist, much less misogynist. At the same time, it doesn’t feel either as careful or as carefully constructed as it might be in Britain. On the other hand, given the sexism that is rife in so many of our domestic productions, especially of early-modern plays, I’d feel a long way outside my comfort-zone condemning this production on any such grounds. It’s an odd thing: I’m generally pretty keen to call sexism out when I see it, but this doesn’t feel even like Everyday Sexism. At least, not the British variety. This is more *about* sexism, than sexist. It’s also worth noting that Jonson’s Celia has plenty of lines, and here is funny in her own right and a long way from being presented as mute or servile. Actually, I can imagine a lot of British productions doing this a lot more uncomfortably and getting it under a lot more people’s radars. And yet, coming off the back of the 3K debate, this doesn’t exactly sweep all the charges about representation away half as tidily as I might have wished. Perhaps theatre in general needs to take a good long, hard look at the way it deals with representing women on stage and to start making a few changes pretty sharpish.

Beyond this, I was at the usual disadvantage with the language – something which you feel a lot more acutely with a comedy than with something that depends more on urgent, painfully, emotionally-charged exchanges – especially when the comedy is verbal – and it’s only right to report that the audience at large seemed to find the whole thing perfectly amusing. But, so far, this is hardly a review at all, so what of the rest of the production?

Well, it’s lively, it’s engaging, it talks to the audience more-or-less continually. There’s no pretence at a fourth wall – indeed it feels like there’s no barrier between the audience and the players at all. The piece opens with the players descending the stairs on their side of the stalls to assail a vast metal safety curtain at the front of the stage. Once this is prised open, with much “comic” gurning (not my bag), the breach between audience and cast is hardly re-established. Indeed, while Volpone (a superbly ill-looking and sleazy Matthias Redlhammer) addresses us, most of the figures of the play who are not members of his retinue emerge from the auditorium as if members of the public – which, given that this is a play concerned with Volpone’s duping of the public, makes perfect sense. There is much extended comic business when Celia scrambles or strides over the seats and audience members of the stalls to get on and off stage.

[returning to this review after an almost two-month break to finish an post it, I find that my basic recollection is that it is a sound, competent production. But, lacking, for me, the modernity and real *attack* of Pornography or Three Kingdoms. It’s fine, and might still knock spots off a number of other productions of Volpone, but compared to the imaginative excesses of which Nübling is capable, it feels distinctly under-powered.] 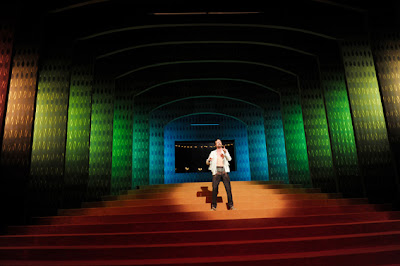