Forest Fringe at the Gate – 5 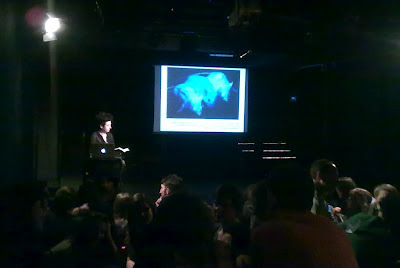 If anything, Friday night's programme of FF@TG was far and away the most coherent of the week so far. The unifying factor seemed to be the deployment of “science” in all three pieces, although other ideas also recurred.

Charlotte Jarvis is an artist. I'd say a “visual artist”, but perhaps “conceptual” is nearer the mark. But it's Art-art. She's a *proper* artist, rather than someone who's an actor or writer or whatever who gets described as “an artist”.

Currently, she's artist-in-residence at the Netherlands Proteomics Centre (NPC). Her piece tonight is essentially a performance lecture, or indeed *a talk*, about her current project.

But before she explains that, she talks us through the basics of the work that the NPC do.

Which pretty much blew my tiny mind.

I don't know a lot about science. And, if I'm honest, I tend to avoid it as a subject rather than trying to rectify my ignorance. I don't have any aptitude for it as a subject, so it feels safer to steer clear of books about it since that's just inviting hours of head-scratching and incomprehension.

All of which means, if I'm sat down for an hour and told about some of the research that's going on at the moment, and indeed some of the things people can already do, it totally astonishes me. Ok, so occasionally bits and pieces filter through my fog of ignorance; I'd already heard, for example, of the luminous mice and the glow-in-the-dark bunny which Jarvis mentions by way of illustration of how biologists are now able to isolate specific proteins that inform genetic structures in such a precise way that they can find out the element of a jellyfish's DNA that makes it glow and introduce that protein into the genetic codes of mice or rabbits (I think that's what she said).

But, frankly, I still find it a) completely astonishing, and b) slightly troubling.

Late in the piece, Jarvis addresses this ethical dimension and, quite reasonably, argues that the popular press's stance of condemnation and fear is largely born of ignorance. On the other hand, having just had the facts explained to me patiently with the case put sympathetically, I still had a few questions about the rights and wrongs of just making a bunch of glow-in-the-dark mice *just because you can*.

More interesting, in the context of the week, though, was hearing someone be so overwhelmingly positive about science and the effects and possibilities of science. In the main this week, science and technology has largely taken the role of representing the potential for death and destruction. Planes have fallen out of the sky. Missile guidance systems have improved kill ratios. Errors at air traffic control computers have resulted in terrible disasters. After all that, it's quite nice, if a little strange, to hear someone create an un-cynical environment in which they can uncomplicatedly extol science's virtues.

It's interesting to hear someone talk about genetics without once mentioning eugenics, or the Nazis, or sterilisation, or torture. On the other hand, it still feels like a particularly big elephant still standing in the room.

On the other hand, Jarvis's sheer enthusiasm for her project, combined with its almost heart-on-sleeve uncomplicated beneficence makes a compelling counterargument.

Her project is essentially to translate the Universal Declaration of Human Rights (just article one?) into a protein and to then inject that protein into some apples. To grow those apples outside the International Court of Justice at the Hague. They are then going to send those apples off around the world to other labs to see if other scientists can *translate* the protein, and then invite those scientists to eat the apples.

See what I mean. It's at once inspiring and also kind of astonishing that it can be done at all.

Translating prose into protein, for heaven's sake! (my inner cynic was quietly amused by the thought that it would be quite funny if universal human rights made apples inedible, but...)

But, yes. Isn't it staggering that that's even possible? So, yes. Most of my experience of this show was taken up with me keeping on picking my jaw up from the floor.

The piece also included a live Skype link-up with one of Jarvis's Dutch scientist colleagues on the mainland. And even that worked flawlessly. I mean, I've seen tech-heavy shows before, even in Fringe venues, but this was passed off so effortlessly as now something that's just a fact of life (and it is, really) that it reminded one just how advanced some technology now is...

And I sat there taking the odd snap with a 3.2 megapixel camera, that just happens to be mounted in my mobile phone. I mean, it's actually mad when you think about it.

Thankfully, there was then an interval, which gave my poor brain a bit of a chance to recover.

First up after the break was Ira Brand's A Cure For Ageing; a first scratch of her new solo show (the follow-up to Keine Angst – which I've somehow stupidly managed to miss so far). That said, it is already so*realised* and dense, that if I'd been told it was just another performance of a long-running show I wouldn't have blinked (it has also made me want to see Keine Angst all the more urgently).

The basic theme of the piece is, as the title suggests, ageing. To look at this, she's currently taken a few diverse strands and not so much woven them together as presented them alongside one another leaving us to make the synaptic leaps ourselves. It's an approach that works very well. The individual strands are, without exception, absorbing and helpfully suggestive – putting some interesting ideas our way in a non-directional fashion. There's a nice bit of poetic writing at the start. There's a bit where she describes a video she's taken of someone standing naked in front of a white brick wall taking about their body – thanks to a technical hitch, she then gets us to close our eyes and imagine the video and the speaker, as she reads out the transcript. For my money, this might even be a better approach than actually showing the video, but I can't compare effects since I didn't *see* the video.

There's a description of how jellyfish (a certain sort of jellyfish?) can regenerate their cells to a younger version of themselves, making them technically, biologically immortal – or at least, immune to dying of “natural causes”.

And, most movingly, there's an email from her mum about going to visit Brand's grandfather in Austria (Brand is apparently German by birth, although you'd never guess). Obviously German grandfathers of that vintage add a whole extra dimension, although this is admirably understated – there's a glancing reference to his being in a Russian prisoner-of-war camp, and that's it.

If this *was* the finished article, one might bridle very slightly at the looseness of the ends, here. But on the other hand, it feels like it would be a mistake to tie it up too neatly. I've got every confidence that Brand knows exactly what she's doing – much better than I do – and doesn't need my musings to get in the way. She did specifically ask for feedback after the show, however, so I've added some feedback at the bottom of this review.


Friday night (Night 5) was also the night that Chris Thorpe chose to present his new piece – specifically written for his week of Forest Fringe curation.

This was interesting for a lot of reasons. Firstly, I don't know when in the week he wrote it, or if he wrote if before the week started (I should have asked), but whichever it was, it was interesting the way that it both fitted well with the other themes of the week and this night, and at the same time sat completely outside them. The second thing that I found absolutely fascinating, was that this felt like the first bit of “drama” I'd seen all week (indeed, there were several pieces I'd have called “Postdramatic” if I didn't think it'd just get on everyone's tits). I know I discussed what I thought the difference between a monologue and a story might be earlier in the week, but it was seeing this piece that helped clarify those thoughts for me.

The difference between this piece and the others is that we, the audience were being addressed as a a specific character. Moreover, as well as being a specific character, we were at a specific point in time with the narrator. The narrator wasn't so much “telling us a story” as going through, well, the *actual* actions of a specific (made-up) man (a man who plainly wasn't the same man as Chris Thorpe, the man who wrote this text).

Interestingly, it was the first piece I'd seen all week where I could totally imagine someone else playing the part. Because it was a matter of “playing a part”.

The part in question, it gradually becomes clear, is a soldier who's returned from some war or other, I thought probably Iraq, given a few cursory details which seemed more *Iraq* than *Afghanistan* - although given the lack of troops in the former coupled with the contemporaneity of the piece, maybe it was the latter.

I said there was science in all three pieces – from Jarvis's remodelled proteins, through Brand's lifespans of jellyfish, we arrived at Thorpe's character's description of how seeing works. Something to do with protons (?? :-/) of light bouncing of an object and hitting our eyes in a certain way so that the synapses in our brains fall a certain way and possibly even release chemicals into our bodies to induce how the thing we've seen makes us *feel*. It reminds us of the phrase “you can't un-see something”.

In a funny way, this rigorous de-bunking of any last vestige of the idea of “spirituality” or “romance” or something that might still attend upon the idea of looking at a field of daffodils or a tree has a kind of atheistic poetry of its own. Later, the same process of description is applied to how we take a photo.

The story hinges on what the character addressing us has seen. And what he's taken a photo of. The photo is printed on a sheet of A4 paper and is face down on the table next to him. And he's asking us to turn it over.

I think the piece is about half an hour long, and it is unremittingly tense. There are fewer jokes and more instances of the word “cunt”. The audience laughs whenever it can, just because of th need to break this unbearable tension. It reminds us that Thorpe is a very good actor, and also, that he can look pretty damn intimidating if the mood take him.

Strangely, the piece isn't really about war or violence nearly as much as it's about friendship.

I won't say more than that, because this piece really should have a life beyond Friday night. It's a great bit of writing – like so much that was on show this week – and hopefully more people will get opportunities to see much of the work in the future.


Anyway, I promised feedback. This is the best sort of feedback: