[More of a description and burble than a "review"] 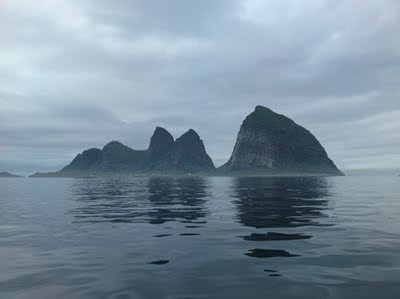 Stupidly, the first thing I found striking about Laurent Chétouane's Horizon(s) was that it was the first piece of contemporary dance I'd seen in ages which had a full-length original score (possibly the one before that was Matthew Bourne's Dorian Gray - 3.ix.08 – [if that had an original score – check]).

It's stupid, primarily because there is a lot more in the show to admire. This was some incredibly fine, fascinating contemporary choreography. But first, soundtracks...

It's also stupid to say it, because it's not strictly accurate. Sebastian Matthias's Tremor has a full, original score, but it is composed of static, white-noise, interference. So, I guess what I mean is “proper music”. Shame on me.

But that is striking. Much (most?) contemporary dance seems to be performed either to no soundtrack at all – with the noises that the performers make deliberately taking the role of the accompaniment – or else to an industrial soundscape, devoid of recognisable notes, let alone instruments. (which, I am emphatically not against. I'm just noting the fact)

So hearing a recorded piano, or, later, string quartet (? quintet? section?) is striking.

And _ _'s score is for the most part a nice bit of work. It's evocative.

Curiously, what it evoked for me most often, and quite probably unintentionally, was a kind of deconstructed Twelfth Night.

I strongly doubt that's what it was supposed to evoke (at least, not specifically), but that's what it evoked for me. (this is another entry for the ever-growing, never-to-be-written “Coming from a very specifically British background and how that influences watching performances in Germany” piece)

There are three performers, two female, one male.

Close to the start (if not at the very start) there's some piano music.

It's a bit like Glenn Gould's treatment of Bach. Not the really early, total jazz stuff, or the terribly slow last Goldberg Variations recording. But somewhere in between (a bit more stately than the clip linked above).

At other points, the music, when it's at its best, suggests Michael Nyman scores for Greenaway films (mostly notably there's a bit that recalls his extended dirge for The Cook, The Thief, His Wife, Her Lover/Heysel Stadium Memorial) , Purcell's Funeral of Queen Mary and maybe a bit of Philip Glass.

It uses that curious arpeggio effect that suggests those early modern twills – like when Greensleeves is played on a harpsichord – which can wind up sounding strangely like jazz.
In its less successful moments, it does sometimes wind up sounding a bit like slightly wallpaper Serious TV Drama incidental music. Probably something by Stephen Poliakoff. The sort of music they always give his stuff. Often one piano note held and digitally treated for a portentious length of time. Followed by the same note again when it finally fades. Several times. Until you're just about ready to kill just for a different note.


Another thing that made me think of Twelfth Night is that nature of the dance here. There is something very deliberate about it; as if director Laurent Chétouane were purposefully setting about taking apart all those galliards and pavanes. You know, those dances you see in historically researched Shakespeares, yes? Well, imagine their movements taken out of context, with the partners and formality removed. It sometimes looks a bit like how that might look.

The piece is also much more fluid than previous contemporary dance I've seen. And much less mannered, in a funny way. Ok, it starts off “mannered”. One of the performers stands on the spot, exploring their own body. Flexing, bending, raising arms, hands, head etc.

There's a moment in this brief first section where the performer-on-the-spot just lowers herself by bending her legs at the knees. And you see the incredibly muscles in her calves. They're totally unnecessary for this little action that almost any of us with the use of our legs could perform – bt they're there. Like massive artillery being deployed to pick off something a slingshot could do just as well.

But, while it's obvious the performers are all clearly ferociously well-trained – there is absolutely none of the physical pyrotechnics we (I) associate with any sort of dance (now that I think about it).

Horizon(s) is all performed at a kind of walking pace. (Of course, as soon as I noticed this in the performance, about 45 minutes [guess] in, they did a bit of running, but that was it).

Thinking about dance from ballet, through to Pina Bausch and Frantic Assembly, there's always (very often) that edge of blackmailing an audience into being impressed just by the sheer virute of the, well, balletics, the virtuousity. The sheer astonishment at seeing people leaping *that high* or lifting one another, or vaulting into one another's arms. Etc. None of that happens in this. Actually, there is one very slow, deliberate sequence (or maybe two) where one person lifts another person up. But, it's not done in such a way as to make you astonished.


Instead, where the interest lies here, is almost in the intelligence of the movement. Like the music that accompanies it, there's a real sense of, well, sense, to the repetitions of movements here. The developments, while largely opaque as to any actual meaning they might contain, suggest at least an internal consistency or rigour. There seem to be purposes here. Purpose to the movements and to the sequences in which they occur.

I wonder if in part that might be down to the more classical sounding soundtrack. The slight suggestion of mathematical logic implied by something that even faintly recalls Bach acting to somehow “legitimise” or suggest an order to or for what might otherwise appear more “random” movements.

But I don't think that's entirely it.

There's also a lot of canny “being-in-the-space”. Which is to say, the performers look at the audience from time to time. And actually see them. They don't just look in our direction. They make eye contact and you can see/sense that the eye contact is held and felt. It's pretty occasional, though. Just the odd look as they're walking toward or away from a particular moment, on the whole.

Another fascinating moment in the piece is a sequence where the two female performers were doing perhaps the most “balletic” part of the show; a kind of breaking down nod to Swan Lake or at least to that school of graceful sitting on the floor bending at the torso in improbable ways. While they do this, the male performer walked around in a large circle, jumping over them on each circuit. It was at once quite funny, but more than that, had the curious effect of seeming to turn their more intricate choreography into something more like living scenery, while making his movement seem all the more real for not being so “artificial”.

And yet the show has no horror of the non-natural movement.

It's another example of the sort of thing where I feel like I might be better off knowing more of the dance-vocabularly being deployed, but at the same time, am almost reluctant to discover it, for fear of losing the pleasures that watching the work with an entirely naïve, untrained eye brings.

Of course, it probably makes my descriptions of it no earthly use to anyone, but.

It was fascinating sitting there watching this piece with the sure conviction that even though it was moving forward through time and space, there really wasn't a discernible narrative that one could necessarily hold in one's head.

More, that there was definitely a sense of an underlying architecture or structure, but that this didn't seek to be either a story, or necessarily even a development or “progression”. At least not in a linear sense. That said, at the same time, I tended to identify the performers as consistent “selves”. And, rightly or wrongly, I identified them with their own genders – whether or not that was relevant.

On the other hand, where the movement suggested, if not “stories” then “moments” or “situations”, I was struck by the extent to which the sorts of situations it suggested were almost deliberately ones which one doesn't find in the theatre so often. Ideas of space, the outdoors and stillness which are perhaps antithetical to the more frenetic pace of drama.

As you might already have noticed, this is the sort of work I could carry on describing for pages without ever landing a meaningful conclusion. I hold myself chiefly responsible for this, for not particularly being the best person for an analytical or assessment-style role when it comes to contemporary dance. Though, of course, you could re-name it “theatre”, and I'd still be at the same loss.

What I loved abut this piece was the way at it opened up a space in which one could sit and watch movement, completely absorbed by it – I don't remember being “bored” once (ok, maybe once) – and yet at the same time, be able to be constantly thinking, but without necesaarily constantly producing “story” or even always “meaning”.

As I happens, I did read the director's notes before I went into the piece (I've decided after some thought that not reading them is only one of two choices, rather than a necessity). As it happens, while obviously fiercely intelligent and articulate, I didn't find that my experience of the piece tallied too closely with them.

But, again, this didn't seem like either a failure (theirs or mine) or a problem.

I think there was probably some exciting liminality going on as well, but I'm never sure how one spots that. I do think the work would find plenty of admirers in the UK as well, were it to ever transfer – The Place or Edinburgh, at a guess.

It'd be nice to be able to have more of a dialogue about it. But at the same time, after seeing it, I felt like I'd experienced quite a complete work which I didn't feel any real urge to discuss straight away. There was something incredibly restful about the sensation. 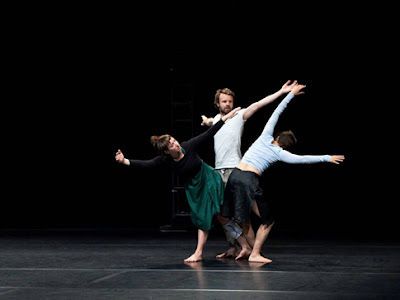 Top photo - the production's own choice of stock photo, which just happens to bear a happy resemblance to Postcards's own recent colour scheme. Bottom photo, company porduction shot. Apols for lack of credit. Leave a comment below if you know who to credit it too, or object to my using them...
Posted by Andrew Haydon at 13:06