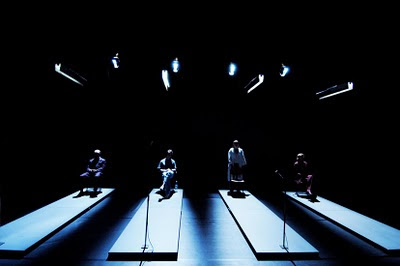 The stage of Schaubühne's Saal C is a shallow semi-circle backed by a high curved concrete wall. On it are four low rectangular platforms. On those sit four functional chairs. Every lo-fi technological element has been placed just so; the mics, the bulky speakers, the starkly visible lights – above, in front, behind and on the floor, pointing at the concrete. This is the aesthetic of determined functionality.

Thomas Ostermeier's Crave premièred in the year 2000. A lovely thing about the German rep. system is that, as far as is possible, it keeps the same actors in a production as long as that staging runs. Last night it had the exact same cast as the premiere 11 years on.

Knowing this adds an interesting dimension to the production. Watching it, one imagines the number of times these performers have spoken these lines. Just the fact of the show's ongoing survival suggests one possible reading of this staging as a newer take on Beckett's Play. Four souls condemned to pour out their stories forever on these plinths in an ante-room to purgatory.

It also makes for is a disconcerting awareness of how the production's resonances might have altered. At one point, the soundscape crackles with static and a voice says, in English, possibly American, something about “all passengers the...” (died?). Evocative enough in '00, perhaps planting the faint suggestion that Kane's “nameless” speakers are all already perished. Post 9/11, the meaning changes again. You consider the way that reality and events will have textured and pock-marked this staging down the years and if the production might have grown or warped to accommodate these new meanings.

At the same time, it's incredible to watch actors who have been performing their parts for 11 years (not solidly: Gier is currently playing about once a month and has probably dropped in and out of the repertoire). Another interesting (if obvious) feature is the fact that they have all aged by 11 years. At a guess, when the run started they were probably your typical casting for Crave: A and M middle-aged, B and C younger, perhaps early/mid/late twenties. Now, of course, they're all middle-aged. B has greying hair. A's hair is much thinner than it is in photos of the premiere.

Partly this feeds into that question about “naturalistic” casting. Its white (but at least male) Othello aside, the Schaubühne tends to cast broadly to type – even if a lot of its leading mens' “types” happen to be Lars Eidinger. However, there's something more at work here. We're not, for instance, seeing several Bs and Cs being pensioned off like so many Billy Elliots once they stop passing for vulnerable teens. As such, this presentation of a slowly ageing ensemble is at once touching and profound. You start to hope that the show will run another 11 years with the same cast. There certainly doesn't seen any decrease in demand – last night's show was still all but sold out.

And it's great to see B (Thomas Dannemann) gone middle aged, not suiting his hoodie so much as once he might. Still trapped, but completely inhabiting, the movements of a younger self. Cristin König as C performs painfully thin and ill; wrapped in a dressing gown and jogging bottoms she looks as if she is trapped perpetually in a hospital or mental health facility. Perhaps here it's just because you know she's 11 years older than when cast that you start to imagine all the changes – physical, mental, emotional – this must mean and imagining them onto her wan face.

Falk Rockstroh seems to take A's early ambiguous statement “Ich bin pädophil” as a keynote for his performance. He delivers the line with unwavering, pained sincerity. Then, throughout the play, he seen undressing and re-dressing; compulsively fiddling with his collar, his tie, his trousers, his crotch. Dressed in a navy pin-stripe suit, you wonder if he's also being played as “an Englishman”. What's also fascinating about his performance is that – even when not catching everything he says – you get the impression that he's constantly signally that he's lying. Something about his gestures, or the direction he looks before speaking. It's beautifully detailed bit of acting.

Furthest away was M (Michaela Steiger) [Q: was M seated third along in the original prod?] who comes across as having least to do, although perhaps this is because she was least convenient to watch. Nevertheless, the brief episode in which she tears at the flesh of her arm with her fingers remains chilling.

That brief moment and short physical segments – breaking the original's stream of consciousness into acts with fits of spasmodic twitching suggesting a plague ward or mental hospital – are rare, however. The primary quality of both the action and of the performers voices is calmness. There is much less hysteria; none of the shrieking that graces many a student production.

Neither do the performers shirk direct-audience address. Almost without realising, we the audience slip between being ourselves – a nameless faceless mass to address – and the other person onstage whom speaker appears to be addressing. Variously we're B to M and C to A and so on. Occasionally they do look over at one another, but such moments are rare. Mostly it feels as if their solitary promentaries are enclosed on three sides by invisible walls, with only the fronts actually open toward us.

The entire production is underscored by Jörg Gollasch's soundscape. This ranges from low level hum to indistinct music; an orchestra tuning up; that sound of a news report mentioning “all the passengers...”; sporadic, insistent beeps.

Toward the end, there is another brief interlude: films of bodies bathed in green light are projected onto each performer. A's figure is near-naked, drawing, scribbling frantically on himself with a marker pen while A stands stock still, his back to us. C's remains crouched or sat, the projection aimed at her breaking over her head, across the floor and up the back wall. This is accompanied by hospital noise – the Beep. Beep. Beep. Beep. Beep. Beep. Beep. Beep. of a heart monitor machine.

In the final moments, the words “In the mountains, there you feel free” - nicked straight off p.1 of The Waste Land, apparently in German in Kane's original text – stand out here in English. At the close the lights slowly start to shine on the back wall before the front lights fade down leaving the performers briefly sihouetted. And it is briefly beautiful. An obvious enough kind of beauty, albeit just about the most austere sort of obvious there is. 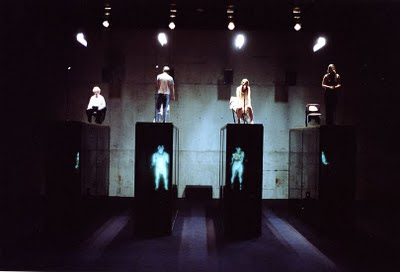 [Note: the above photo is from the original, original staging in the main space - the performers aren't ever on blocks this high in the smaller studio space. Pity. I like the look of the above] 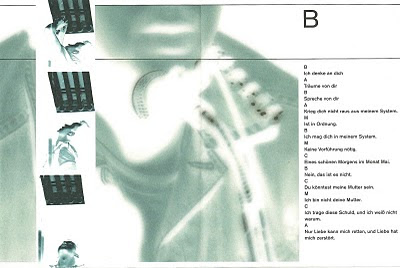 [above: scan of a spread from the programme. Below: programme cover - because you want to see these too, right?] 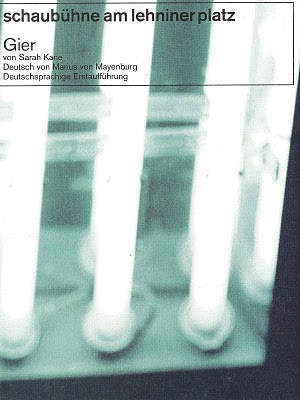