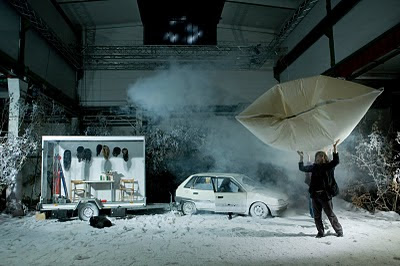 [the above pic is from Quesne's previous show, but still gives a rough idea of the sort of staging. Will post a properly relevant photo as and when I get hold of one]

It is possible for a performance to remind you of a show you haven’t seen? For reasons that I find slightly suspect, Philippe Quesne/Vivarium Studio’s Big Bang reminded me hugely of Forced Entertainment’s World in Pictures. Which I’ve never seen.

Ok, there are some good reasons. For a start Big Bang seems to have a similar topic: a kind of potted history of humanity -- or perhaps the planet -- from the ice age up to our own ecologically concerned times. I say “seems” – the work doesn’t exactly bend over backwards to fix or underline what various sequences actually mean/represent.

There’s also the comparable sort-of-clownish, sort-of-ramshackle sense of humour and aesthetic: the piece starts, for example, with performers shuffling about on their hands and knees, first under white plastic sheeting before emerging from under this to similarly shuffle under white and then brown fake furs, suggesting a rudimentary vision of ice caps melting, polar bears evolving and then brown bears or perhaps walruses turning up. The stage lights conspire with this impression, rapidly suggesting suns rising and setting, while a smoke machine delivers stuff that could easily be read as arctic mists. All this is also very funny and, when the bears start speaking with cute French accents, tres charment.

Quickly, the bears evolve into cavemen wearing furs in some cases, and a small group of apparently multicultural French designers in others. The stage rapidly fills with the detritus of ancient and modern life: wood fires, an upturned car and, for some reason, an ever-growing pile of inflatable dinghies. The cavemen sit in the upturned car reading graphic novels drinking Lilt. Such is progress.

The back wall of the stage is lowered to reveal a further similarly sized stage behind it, this time in green. Water rains down from a shower hidden in the ceiling. There’s more smoke. Music plays. Some players don green overalls, blending into the backdrop and performing obscure tasks. A ‘cello is moved across the back of scene. A small heap of material at the back of the growing onstage lake becomes a silhouetted island, vaguely discernable through the mist. The scale bounces between miniature and actual. Other performers wear space helmets and pose tableaux. A small lonely astronaut sits in the abandoned overturned car downstage reading a graphic novel. Inflatable dinghies pile up in the pond.

It is uplifting, optimistic, funny, pretty, wistful and melancholy. Sometimes by turns, sometimes all at once.

There’s a sense that there might be the tale of a society naïvely driving itself toward eco-catastrophe though joie-de-innovation in amongst all the fun and romance, but it could equally claim to be the world’s most innovative staging of The Tempest. There’s care and attention behind the creation of the stage-pictures which repays whatever level of investment you might bring to bear on reading them, and enough archetypes at play to offer any number of satisfying variations of the story they might be telling. 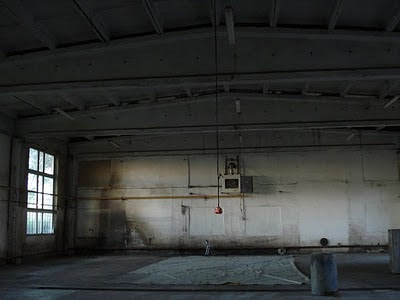 above: the ante-room of the venue "Baltoscandal 6" - a massive deserted factory on the outskirts of Rakvere.
Posted by Andrew Haydon at 15:27